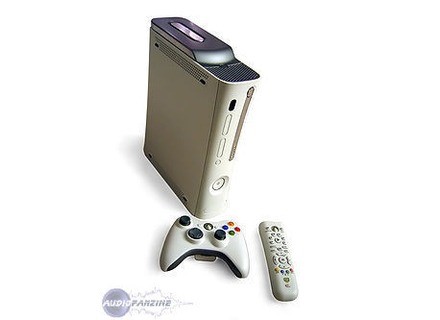 Xbox 360, Electronic Game & Console from Microsoft in the Xbox series.

Microsoft Xbox 360
4
Microsoft's Xbox 360 is probably the best selling home console right now, and it is very versatile, very valuable, beyond the obvious gaming capabilities. With the newer software updates, you can now use the Xbox almost like a computer for your TV. Mainly, there is now access to Youtube, Vevo, internet radio, just to name a few of the newer apps. Of course, there's always the option of connecting to your desktop computer over the local network, and accessing media, such as songs and video, from your console as well.

I find the Xbox to be a great alternative to watching tv, and trying to be more productive at the same time. By switching to the Vevo app, I can watch live Thrice videos, get some inspirations for stage setups, performance ideas, songwriting ideas, what gear they use, and so on. By taking a routing that for most of us, wastes time (watching tv or playing video games), we can now switch it over to something that is more useful, yet still enjoyable and relaxing. And because it's built right into the Xbox, it is incredibly convenient.

What I used to do, was I hooked up an old laptop to my television, downloaded a bunch of fly format music videos from youtube, and watching them on shuffle mode from my laptop. I always had an an Xbox 360, but it is incapable of playing videos in the flash video format, flv, and I had no easy way to convert it. With the new Youtube and Vevo apps, this is now unnecessary, and now I've essentially ditched my laptop. I can set up playlists in Youtube and Vevo directly, and watch my music videos. The only different now, is that there are occasional ads, but they are short and not too invasive.

Overall, Xbox360, and possibly all future game consoles, will be build with more than gaming in mind. Let's hope they can keep options open for us professional musicians (especially with Kinect!)