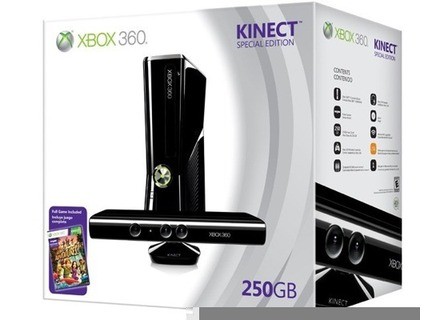 Microsoft xbox kinect special edition 250gb
3
Kinect, released by Microsoft for their years-old Xbox 360 product in November of 2010, changed the way we look at controller inputs to computers or consoles. It opened the door for completely new controls, and new ways of looking at how we can control our computers systems. For the Xbox 360, these came mainly in the form of games, such as using your body as a wall or block, dodging objects, playing sports, learning dances, flying, and so much more. Kinect was a big success for Microsoft, and developers are only beginning to scratch the surface of what Kinect can do outside of the gaming world. And perhaps, it can be used in the music world, possibly even as a way to control musical instruments.

But could Kinect, say, be converted to be used as a MIDI controller? Perhaps like a Theremin, where you can wave your arms in a certain direction to change the pitch and volume of the sound? Or perhaps the position of your arms can control a CC channel, such as the basic modulation wheel? Or could use a forward motion to activate hits and drum pads? All of this is certainly possible, but I believe the Kinect has an inherent lag or latency that may be too high for precise musical applications. Whenever I play games on the Kinect, there is always a latency between when I move and when the Xbox 360 completely senses and understands my movement. I'm not sure if it's software or hardware, or if it's simply a fault of the Xbox 360, or a fault of the Kinect in general. There is a lot of data that much be processed, and perhaps, when software processes become more efficient, and they are run on faster computers (as opposed to the Xbox 360's CPU), then the latency will drop. That, we can only hope.
Did you find this review helpful?yesno
»