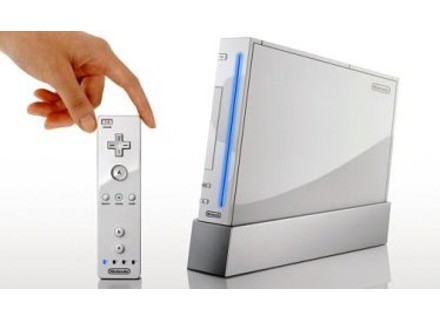 Nintendo Wii
5
I have been using the Nintendo Wii for about 3 years now, and I love it. This system is for the family, my kids love it and play it all the time. I have no complaints with the Wii. But for myself, I am more of a sports gamer and the sports game on the Wii are more cartoonish unlike playing them on Xbox or on Playstation. But the Wii wasn’t made to play games like Madden or NBA Live on. The Wii was made for family friendly games.

The Wii has good graphics and a great flow to the system. You have channels on the main screen that are all right there in front of you, no need to flip through a bunch of different screens. The Wii remotes are wireless and motion censored. We love playing Golf and Bowling on the Wii, its very fun and competitive. You can also create your own character called a Mii. You can put your “Mii” in most of the games and use them when you play, but not in all of the games.
The Nintendo Wii can also connect to the Internet via wifi connection and you can download more games and channels right to your wii over the internet. You can download games instead of going to the store to buy games, not to mention you can download classic games like the original Mario and Zelda.

Overall I love the Wii and its a lot of fun for the family, especially now you can download the Netflix app right to your channel screen. You can stream all of your favorite movies right to your tv from the wifi connection on the Nintendo Wii. The Nintendo Wii has so many possibilities and it will only continue to grow year by year new things will come out and it will get more fun.

Nintendo Wii
5
I've been using Nintendo Wii since it came out about two years ago and I really have nothing but good things to say about it. I've come to trust Nintendo to make great games and console for years and years, and Nintendo Wii is just the newest model that they have to offer. Within this compact gaming console, you have the ability to play a variety of new games, as well as download older Nintendo and other games. Since I'm a big advocate of classic video games, being able to get some of those games on a newer system was a huge plug for me. The controllers, known as Wii-motes, are wireless and very smartly laid out and easy to use. Wii Sports is probably the game that this is most associated with, as you can act out and play all sorts of sports with your Wii-mote like baseball, tennis, golf, and boxing. Since you move the Wii-mote as if you were actually playing the physical games, it makes the game play extremely realistic and even funner to play. While the graphics are nothing like Playstation 3 or XBox 360, Nintendo Wii is a different type of system made for a different type of gamer. Probably the best part about Nintendo Wii is the price, as it will cost you a lot less than some of the other gaming consoles out there. I have also found that Nintendo Wii is not only a big hit with kids, but with adults and everyone in between. The realistic game play and fun attitude of the system makes it great for the whole family at a price that won't break the bank. If you are looking for the future in video game entertainment, look no further than Nintendo Wii as it is just another great leap in the world of gaming brought to you by Nintendo.
Did you find this review helpful?yesno
»

ur-quell's review (This content has been automatically translated from French)

Nintendo Wii
5
I've bought in the beginning of the year for its games on the internet after Wanted qq j have discovered that the year could be used as a MIDI controller on mac (and PC) I speak dabord first of its function and its use Schedule (more interesant for most of us)
issue is really great games have always j and follower of Nintendo and the importance of the cot acordent fun.
exelente jouabilt is the (at least for games that I have)

but what is very interesant c is that the Wiimote uses Bluetooth technology to comuniquer with the console.
can therefore be used as the controller with a computer.
mac software (darwiin remote) allows you to make a tool that renews c mice but is not very precise.
other software (wii to midi) can make a MIDI controller. and it is really interesant. the summons must be done manually (the sensor acceleration of gravity and constantly sends a signal we can use the config simplifies the software.) but the control is really funny
j example assigns the cutoff frequency of a filter acceleration al. REMOTE CONTROL by shaking the filter up and down very quickly.
ca produces kinds ouiaouiaouia really nice
pc software must be used simultaneously but SEVERAL c is mainly GlovePIE software that will help you.
another mac music software is the small "sequencer" Wii loop machine very easy to use but very limited.

n I said no more of Isaiah is best for you even a 250 console with a controller and one Nunchuk
or about 40 and a controller 30 for the nunchuk only
offers a new possibility of a price more than Raisson.
Did you find this review helpful?yesno
»

Cbass's review (This content has been automatically translated from French)

See all 22 photos of Nintendo Wii »