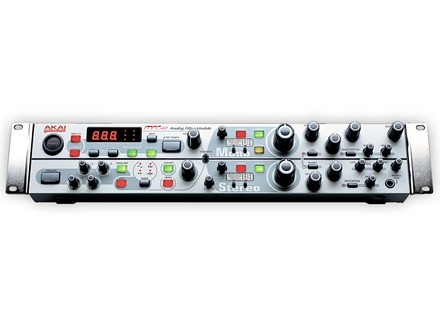 View other reviews for this product:
It's got the aforementioned drawbacks, as far as considering stereo/mono as separate channels.

I got it when Guitar Center mistakenly reduced their price for a blowout sale. It's an analog filter module. It has two inputs, mono and stereo, though they're both mixed together to the stereo outputs. First of all, the interface design is sublime. Signal flow pretty much moves from left to right, with modifiers being on the far left so you don't wonder why something is behaving the way it is. Knobs you tweak often are larger, and protrude more than others. Knobs you tweak fairly often are medium-sized, and knobs of specialized functions are the smallest of all. Variable choices (filter modes) are on buttons or toggle switches. Excellent. All buttons light up to let you know if they're selected or not. So... the sound? It's not too colored, which is good if you're filtering a whole mix. The filter doesn't have the same character as, say, a Moog or a Roland SH filter. It offers choices between 12dB/oct., 24dB/oct., and 48dB/oct.(only available on the Mono channel). It's got a phaser (decent, though not too very wide), and a distortion effect (evil or off. Two options.) There's an LFO, and an envelope (which can be triggered via MIDI), though both can't be used at the same time. Also, a major shortcoming: though the LFO rate can be synchronized to MIDI, the phase of the LFO cannot. For instance, if you have, say, a sawtooth wave selected for the LFO, there's no guarantee that the starting point of the wave will be on the beat, though the tempo will be constant. Too bad. Also, the effects (distortion and phaser) will be applied equally to both the stereo and the mono channel. Best, then, to think of this as a single unit with flexible input options. -Hoax

It's pretty nice, and can be used in any number of contexts. I put the stereo filter in notch mode, modulate it with an LFO, then turn the phaser on, and it's a supa-warm and organic effect for electric piano.

Originally posted on FutureProducers.com
Posted by: Cruel Hoax ( 1-, 2004)
Did you find this review helpful?yesno