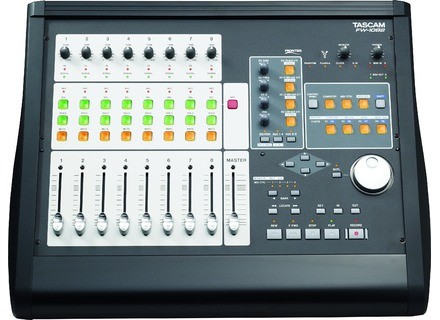 View other reviews for this product:
The Tascam FW-1082 is a digital mixer and audio interface combined.  It is firewire based, containing eight channels of faders and inputs, and four built in microphone preamps.  It also has two MIDI channels and 1/4 inch outputs for stereo monitors and a headphone jack.  Each of the channels has a fader, a gain knob, as well as solo, mute, and selection buttons.  There is a three band assignable EQ built in, which can be applied to any of the channels, as well as built in panning.

I find the Tascam FW-1082 to be quite easy to use, as you've really only got the basics to work with here.  This unit is aimed at making it user friendly, as there isn't anything more than what you would need to do some basic recording and mixing.  Having said this, it still has a lot of features to work with, and it will take a bit of use to understand everything and to use everything to its full potential.  However, the typical function are right in front of your face and easily accessible.  Unless you're a beginner with interfaces and mixers, I think everything can be figured out on its on for the most part without the use of a manual, but it probably wouldn't be a bad idea to have it around anyway.

The sound of the mic pres on the Tascam FW-1082 is about average, and while it will definitely get the job done for small home studio recording, don't expect all too much from them.  They come through pretty clear, but they are bit too transparent and lack the depth that I would look for in a set of good pres.  However, considering this price and the overall make up of the unit, I would imagine that users aren't looking for the world when it comes to the pres.  The EQ is of course assignable, so it doesn't actually make any sound without linking it to a plug-in.  For building a small home studio around and getting some demos and basic recordings done, the Tascam FW-1082 will certainly do the job...

Recently, the price of the Tascam FW-1082 has dropped in further than it was in the past, as it looks like they are trying to get rid of these to make room for the newer products that Tascam has to offer.  This is definitely your gain if you're in the market for an audio interface and mixer combination, as this is a great deal as of right now.  While it does not have the best sounding pres in the world, if you're just looking to get started making recordings and want to build a home studio, this would be a perfect place to start in my opinion. Definitely a unit worth looking into for those who want to start up a small studio...