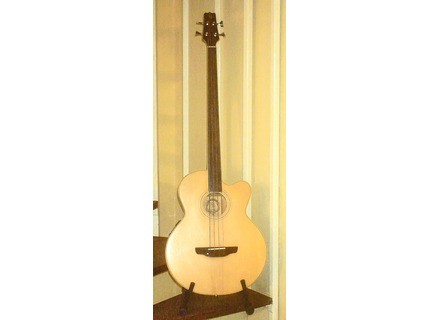 mouclier's review (This content has been automatically translated from French)

I use it with an SWR rgulirement One Sixty for its low standard for sound effects it comes into its own with a Casing of direct
lack of EHJV unplugged
I use it in evening especially to rest the shoulders of my old Jazz Bass that makes its weight!

Excellent quality price
I sell to buy a good speaker
I use little
Did you find this review helpful?yesno
»

waltcarl's review (This content has been automatically translated from French)

A very good bass for this price
I have since 2002
Its strings were originally flat net with a low sound of cons to be mistaken, but little sound without amp
So I asked bronze strings (you know it's cheaper for the paradoxically low?)
The strings br. have a special gloss that gives more acoustic sound and generate a lot of harmonics that I do a lot of false harmonics ring
At the top of the handle string zither curl slightly reminiscent
I also plays a little like an Arabic oud with quarter tones
In the game at the neck it sounds even with the bass strings bronze

Defects: the mechanical means take the shot, I mean ankle
IT has happened that makes me the preamp of its own, but now it's good
She quickly gets reduced, so I put a cover for anti larsen concerts but that the definition of food

The preamp does not please me too, might be because I am afraid it loose and the bass is actually a little too powerful

Low delivered without the screws fastening strap, I made them pose ....

A good bass sound that accompanies well and has lots of universes in reserve (guitar, djembe but no more!)

At the end of a concert they came to ask me what it is etc. .. and tell me it's a very elegant instrument ...