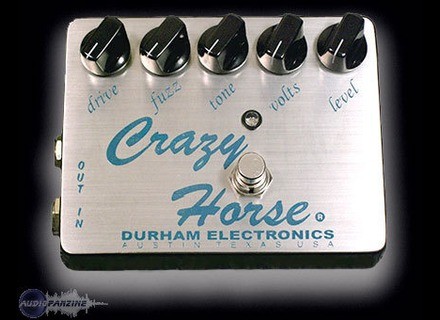 Pat Vurden's review (This content has been automatically translated from French)

Durham Electronics Crazy Horse
5
This PDAL Has Designed to simulate the sound of Neil Young if CHARACTERISTICS.
It is a distortion pedals / fuzz.
It possde power by 9V battery (not hatch ACCS must dvisser the bottom), taken to an AC power adapter 9V.
A jack of an outlet, both located on the left cot.
A switch on / off.

Note that the pedals is relatively quiet given the size of his.

Regarding the shipping sounds, it's easy. The drive is for the distortion, is a lightweight drive a more aggressive distortion, the sound is plutt fat. The fuzz is the same. the sound hardens as and the knob of the race.
For Tone, the center position is neutral, left is more serious, and right, more acute. This knob is effective in coloring the sound.
Regarding the knob volts, the one enters the heart of the pedals because he gives the true personality of the pedals. Its use is effective that from the position 10 hours before, a bunch littralement sound. The purpose of this function is to increase the tension of the pedals, up to the sound and sustain an attack crazy!
The level, well it's nothing less than the volume-General for the pedals.

The book is succinct and trs in English, but hey, we can easily do without.

The effects are trs effective, especially the knob volts which is the sound of the pedals.
This sends srieusement pedals, it's big sound, full of potatoes and sustain.
The sound is prcis, except, if you put any sr bottom.
I test with a Telecaster Thinline 2 doubles team of coil Seymour Duncan (SH1N and Hot Rails) with a Les Paul Junior team of KCP-90 (Chenaouy Kamel), and with a Aria Pro II PE-450, plugged into a Marshall 30W lamps, and with 3, sounds terrible!
I am more adept at distortion that the fuzz, but everyone should find something ...

I Reue only yesterday, the U.S. command as found in France.
Mine has the serial number # 274 is whether the pedals do not drag in all stores of the world ... zik
The only two points, which I think can s'avrer teachers for the user, is the lack of hatch ACCS direct the stack, and the position of the two jack same cot. I have not yet ascended to my pedalboard, so I can not comment on the latter prcisment.
What I like about this pedals is its sustain (bottom knob volts) and his attack. IDAL is the chorus for me as far from being a virtuoso, I need to sustain to fill the time between two notes ... lol
The sound is just as grunge prcis.
I tried a lot of distos (DS1, Carl Martin Plexitone, T-Rex Budhonney), it has a little something that others do not ...
I pay 235 with shipping and customs, but hey, given the quality of the product and the possibilities of sound, is worth it, and then, as a big fan of "Loner", is a pleasure to be able to approach the sound that gives me so much pleasure ...
I'm not this pedals, and I would do the same choice.

Edit: To hear the bte is by: http://fr.youtube.com/watch?v=Gq5ZJHtVLJE