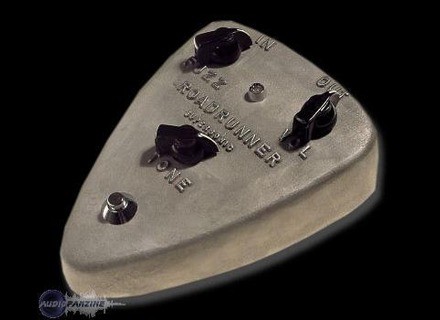 Very easy and effective! You won't get a headache with endless and ineffective controls.

With this fuzz you immediately know if your overdoing it or not... but you can still make extreme settings without getting frustrated.

A small con is that even at the minimum it's still a lot! Too much for 6-note chords. But a fuzz effect is not made to play Stairway To Heaven.

I use it mainly to boost my solo sound. The sound is too big for other applications because I play mainly clean sounds.

The triangular shape of the pedal housing is stable and allows you to put your foot on the switch in different positions.

From Hendrix to death metal you'll make a huge noise. But I use it successfully for solo parts in a much softer way.

The sound character is beautiful, especially at high output levels! The main advantage is it doesn't weight down the sound or decrease the dynamic range. The sound becomes wide... very wide...

Very big and hot sound with a tube amp! But it's not always easy to use.

A bit too expensive but it's a boutique pedal that doesn't support modern slavery (which is rarely the case). And you get a life long warranty!

I love the design...

(I use it with a Brian Moore i1 and a Vox AC30)
Did you find this review helpful?yesno
»

Badcard's review (This content has been automatically translated from French)

In / out jack and a power supply.

It could not be simpler:
A knob for effect (Fuzz!)
A knob for output level (to maintain the level or contrary to the booster)
Tone of a knob.

An LED indicates the state of the effect (on or off)

Bluntly bluffing from a Hendrix ZZ Top, everything is l!!
And with a quality sound and a harmonic richness!!
The fuzz is a distortion particulire and inimitable.
I love, and the pedals is part of my permanent setup.

Use envoron since 1 year.
I prfre from the sounds, it's robustness and transparancy (long live the True Bypass!)
Well above the Big Muff and Fuzz Head
It's expensive, but nothing comparable in quality on the market.
I would do the same choice of shot!
Did you find this review helpful?yesno
»

coyote0's review (This content has been automatically translated from French)

RoadRunner Guitars SuperSonic Fuzz
4
Analog Fuzz Pedal
input, output and a socket for power.
input and output are reversed from the most part of pedals, namely the entrance on the left and the right exit.
it just complicates the cabling on a pedal ...

3 knobs, so nothing complicated.
what is strange is that for the same dynamic that's clear, and the same sound level, you must put the volume knob to 3 / 4 of its travel. it does not still have a lot of power available on the rest of the race knob.

It is a very good pedal for those who love the sound fuzz .......
very dynamic and harmonic richness, broad range of use.
the knob to 0, we have already quite a fuzz this, some may regret that,
but the fuzz in my opinion is a bit extreme effect, otherwise it remains in overdrive or distortion.
What's great is that when going from clean to fuzz, it does not lose momentum, and it's partly why I turned my Big Muff, when it started, s'applatissait sound, even pushing the volume.
I use it alone or paired with a box of rock zwex plassée in my effects loop, it recovers some notes, and adoussit the fuzz while retaining a lot of energy.

I have since September 2008.
is a special effect, giving more rope to change the sound.
I play on an amp that allows Orange to go very far already in full so my nuances.ça sounds available.
I had a Big Muff that I will sell because it is largely surpassed by the latter.
This effect is quite expensive compared with the competition, but worth the price of a good pedal. It has a custom look gross stripping the most beautiful effect.
In addition to the team roadrunner that I met at the show in 2008 is really nice, so a little chauvinism for once ...
Did you find this review helpful?yesno
»

From beginners (I possde the prototype MODEL # 1)
the shape, sound, robust
I possde + - 40 vintage pedals
the quality has a price!

Did you find this review helpful?yesno
»
Read the 5 user reviews on the RoadRunner Guitars SuperSonic Fuzz »