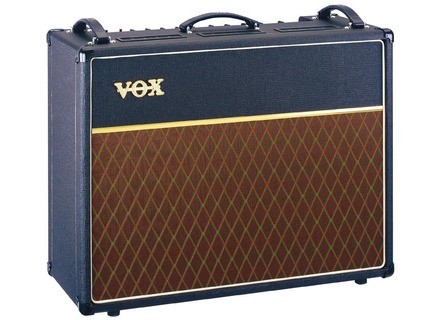 Vox AC30CC2
5
This amplifier is a recreation of Vox's celebrated AC30 amplifier, a legendary amp in some circles. There are also a few new features. There is 1/4" input as well as an effects loop, which is a new feature. It is a tube amp with 30 watts (hence the name). There are switches for output biasing and clip controls, which are really new features and can really help problematic amps find their sweet spots. There are two channels, normal and top boost, as well as the ability to blend the channels which is really something. There are also EQs, tremolo and reverb. The tremolo and reverb can be controlled by footswitch.

Getting a good sound out of this amp is easy, however, if you want a truly phenomenal sound, replace the tubes, as they come from China now, and China makes cheap products almost exclusively. The one complaint I would make is the inability to switch channels with the footswitch. This limits the features of the amp, however, I tend to find the sound I like and stick with that and I mostly haven't had too many problems. The manual explains very clearly what each function does and how to use it, it's very useful.

I like to use this amp with a wide variety of guitars, as they each have their own unique flavor combined with this amp. I think that the sounds that come out of this amp are phenomenal. Both channels have their flavors, but I think that the channel blending feature really gives this amp its best sound, as it combines the high end of the top boost channel with the warmth of the normal. When in this mode, tone is entirely up to the player, as one can go from a clean warm sound to an overdriven bark instantly. The dynamic response of this amp is extraordinary. I think better tubes and pots will help sound a lot, as the cheap chinese parts don't do it much justice, but this is still a fine sounding amp.

I like the tone of this amp the best, as well as the dynamic response. The reverb isn't quite as good as the old ones, but it's still ok. I don't use tremolo much but I think that this amp has a great tremolo. It's not too expensive and while it's not quite as stellar-sounding as the original AC30s, it's a fraction of the price, so it's possibly a better bargain. This is definitely worth checking out.
Did you find this review helpful?yesno
»

Rooyon's review (This content has been automatically translated from French)

It sounds !! CGHT hp with green back

Excellent but watch very few versatile
seems well built but not my orange comparable ad30r
Did you find this review helpful?yesno
»

luc68's review (This content has been automatically translated from French)" I finally got one!!"

Vox AC30CC2
5
everything has already been said above there

the manual is not much, you get used to the settings quickly, and you get different sounds for each position of knobs or switches

I play ROCK! well the vintage of the machine suits me perfectly. whatsoever with my "strat" ​​self made, a Lag RS500 Limited, or an old Epiphone Les Paul, there's plenty to be + as pleasure. Pure and punchy crunch well, depending on the volume of microphones and guitars, the sound palette is unimaginable. and without any effects, I'm a dinosaur, a guitar, a cable or a radio and amp, period.

I for 3 days, I've been dreaming for a long time .... I had lots of amps guitar in 36 years, but it would take too long to list, but this one I needed. I bathed with Bertignac, the Stones, Led Zep and co, I am in 1963, and then I returned to sources.je have acquired under + than honest can a great guy to me exchanged against my Hot Rod Deluxe. it has two / three years but has only ten hours of play, not even run in the first rehearsal of the bougre.à my group, I got chills, not too loud, not too clean, and hop back to the 70's and 80's. even other musicos congratulated me on my purchase. I put 9/10 because of the weight, but it is not able to move for the rehearsal room is my home. for future concerts, well, I'd watch my back or I'd help a friend.

7 of 11 people found this review helpful

palko's review (This content has been automatically translated from French)" A very heavy amp, but!"

Much has been discussed on this amp. I return, however, the negative relative
its weight! Indeed, it is unfortunately important, but it is undoubtedly a phenomenon of size relative to the pitch it produces.
It's a very ironic choice of buying this amp, my back knows something, but there is fast and after comparing her weight is forgotten once installed. In any case there is no mystery, it's about physical and logical sound!
In this serious 2x12 combo amp delivers a magnitude close to a stack 4 x 12 configuration, and it is rare for a combo. I use (when the situation allows me) AC30 and two spaced apart by a distance, the result is amazing and much better than a stack.
As the editor Finlay on this site, I recommend using this amp at a minimum of 12.00, otherwise it does not provide the full capacity. Specifically, if you play at low volume and you work or live sounds through pedals, you will never find the grain that you use the medium volume if you switch to a higher power. It is important to work sounds at the same power you use in a group.
This amp is not made to play in an apartment, it is far too powerful and does not deliver the best of himself at low volume. Remember that the sales slogan in the 50/60 year was "to play in stadiums" and frankly I can tell you that it is not just a question of power but of scale and sound diffusion, because in an environment of musicians, you are guaranteed to hear you clearly playing with this amp, the sound is diffused everywhere. I use it for 6 years and honestly I can certainly swear to anything and say that I would never pass the competition, as all tube amps have a special,
but I can say that this amp is just amazing and very unusual. Even in clear sound it provides a warm atmosphere that provides a grain that is noble and generous in his own VOX! This amp can provide smoothness and acoustic wave, where its versatility very special .. True Class A amp? . I leave that assessment to connoisseurs of art enthusiasts can make judgments about this feature, but I can tell you that these 30 are not w-watt carpet dealer, a 100 W transistor takes no side on this road amp, even at 60 w lamps struggle and drown in the power that comes from this amp. I have long used the amp transistor for high power play, two 100-watt Fender, and I was often in a very uncomfortable position on the sound space I occupied among other musicians. Sometimes I was too hard, sometimes too short, I did not get to play! Bluesman a friend once told me, "uses a tube amp and you no longer meet this problem", I could not believe it too ....
From the day I bought the AC30 it was magic, the sound was very distinct and I got along adequately in formation of 4 to 5 musicians. In fact, after I inquired I found out that the analog signal provided by the lamps and for most tube amps, was much more noticeable. Indeed, there is now sound or HI FI can match lamps in terms of real quality in hearing the sound space. The lamps are to the amp what the cardboard speaker: irreplaceable and unmatched since its invention! I read in a review on this site that the spring reverb of this amp was not terrible! Honestly, I have racks of effects of the most efficient (vox, tc lectronic, boss, lexicon) and I can tell you that I use only the reverb of this amp is very hot, "analog" and especially appropriate for the sound of the AC30, it is more simple and easily configurable. The tremolo is also a very good ... In short, I recommend an amp for playing blues, rock and other styles ....

Did you find this review helpful?yesno
»
Read the 15 user reviews on the Vox AC30CC2 »