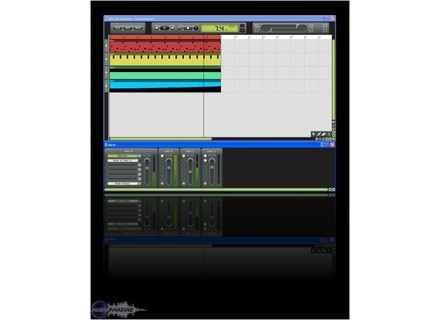 ben_silicate's review (This content has been automatically translated from French)

Mutools Mu.Lab
4
No installation, in fact: you download a rar file, you open it, you double click the executable and this is it!
I have not tested all plug-ins that I had but to those I have tested it n 'there was no problem. Ditto for my devices, fully recognized.
The manual is in English, the site of the publisher. It is indigestible to read because you have to type all the crap in order, and if one seeks a precise info, this is discouraging.
However, the manual did not seem necessary, I found almost all searching myself.

I have a Pentium III in an HP Pavilion laptop with 2G of ram and a sound card edirol FA101. The software works great. No bug found.

I used it for 3 or 4 days.
What I like most:
Aesthetics sober, pleasant and efficient.
The fact that we can do pretty much anything as big sequencers payment: editing audio tracks, complete MIDI editing (including quantization), management of VST and VSTi, Advanced Modular routing, parameter automation plug-ins ...
Stability, ease of installation, usability and clarity of the interface that teaching will make sense in a music class in college.
free of this little gem

What I like least:
The number of tracks LIMITED 8! that's a shame.
The layout of menus is sometimes confusing: I do not always understand the logic behind: where do you click to get such a window, to edit this setting, but you get it anyway with the usual.

Pquenin's review (This content has been automatically translated from French)

Mutools Mu.Lab
5
Installation could not be easier, because you just unzip in a directory, and launch the application.
It must be sr as in any software audio / midi audio devices and indicate its noon and rolls.
Caution, however, for audio, Mulabi only accepts Asio drivers (on Windows, I do not know about Mac). If your sound card does not, you must download and install Asio4All (wwww.asio4all.com). Edit: this is no longer true since version 3: one can utilsier standard Windows drivers, but watch the latency in this case, if one wants to play with VSTis in real time.

The documentation is simple and clear enough, however, some functions "advances", but OK to take the software in hand.
Mulabi has a philosophy spcial a bit compared to other programs of this type, which is its charm but can Drout a bit. However since version 2, it is possible to use a Manir "classic", ca that will delight beginners in computer music.

Mulabi walk nickel on these two machines, it is very stable, it is the hunt to dveloppeur of any bugs and is trsractif (Mutools forum on KVR).

I use it for 6 months. What I like most is its pure interface, which is not overloaded by hundreds of functions. Also, I enjoy its architecture is modular and allows for little prs anything in routing audio and midi (if necessary). It also has an editor of synths and effects (a sort of Synthedit intgr which allows you to create instruments and MIDI effects and audio. Since version 2 there is also a sampler int gr. In short, there is under the hood Behind its simple appearance.
The default: missing functions in the composition window (the one with the tracks and "clips" on the tracks) to delete, promising R & D measures.
I do not like either the Manir which we "draw" the automation curves.
Overall, I love this program: it has all the essentials (version 2.5 and since it integrates the Rewire, making it a perfect companion to Reason), it is simple, clear, stable, cheap, its dveloppeur is listening and the advances without Precipitation Occurred in privilgiant stability.