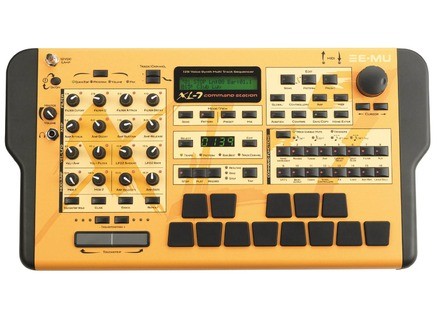 E-MU XL-7
5
The features are tremendous. 16 track sequencer suitable for live use, great sounds, very hands on tactile control. Every single knob and button can be assigned to your liking if desired. Almost every menu and editing feature is never more then 2 button presses away. The box features 2 midi outs, 4 audio outs as well as digital audio outs. There is only midi in however and the command station can only sequence 16 tracks at a time despite its 32 track capabilities. Effects are limited usually to the machine as a whole, but can be overcome with the use of the filters much of the time. It also features a usb plug, which only has limited functionality. I think it was added merely as an after thought by EMU

Initially the box is very intimidating. its quite heavey and well built, and the manual is well over 260 pages. more then 300 with the many addedums from OS updates. The manual is very easy to read, and once its read through opeation is a breeze. The command station was designed for live use, and succesds at it. Features are merely a touch away and everything can be done with two hands. Things can be touch at times with the smaller lcd screen, but due to almost everything being labled and accessable through the triggers and knobs navigation does not need to rely on reading the lcd screen.

Overall the sound quality is very nice. The XL-7 is a rompler, which provides both flexabilities and limitations to the sound making capability. All of the standard waveforms are there including some variations on them called &quot;Audityxxxxx&quot; (insert your favorite wavfrom into &quot;xxx&quot;. Since the wavforms are samples, not DSP or analog they sound quite good, but not exact. Unless your going for a classic saw rip or something similar however one will not know the difference. there is also quite a collection of other noises, hits pads, samples and such suitable for electronic music. Each patatch in the XL-7 is saved independantly, and you can use any sample in the box to create patches with up to 4 layers per voice. Each layer can be routed, and patched through various key ranges on a keyboard to create evolving sounds. There is also an extensive patchord system which allows you to rout ANY paramater to modulate any other paramater. This goes way beyond any simple LFO routing. To add even more to this you also have the delicious z-plain filters which make EMU gear so famous. up to 12 pole filtering capabilities with EQ, distortions, Wahs and much more. Of course the classic LPF, HPF, BPF are included as well. the only problems arise that since the routing is so deep the sound can often times get out of your control. a sound maybe modulating or changing, and you just cant figure out what is affecting it. you'll be scrolling through patch-chords and filters and cant figure it out sometimes.

Very well built. its an aluminum or steel casing. the sides are black plasitc, but I have not had any problems with them. They are easily removeable to rack mount the command station. Repair is easy as the machine opens up nicely and is easy for a user to install new roms if desired.

I love this thing with all my heart. They are sadly now discontinued. Buy one if you can. It is the heart of my live Pa project and is equally powerfull in the studio. Owning anything discontinued always draws envy. The bright yellow casing always drasw people's attention to the stage or in the studio. The &quot;wow&quot; factor certainly is present. The flexability is quite remarkable. The power of a synth, but with the added features of layerable and mixable sounds. As a standalone midi sequencer in and of itself it is probably one of the best around, and can be the heart of anyone's studio if they want it to.

- 3 pairs of analog outputs on jack 6.35 a main stereo output, and the other pairs for individual outputs, or effects, and are also configurable inserts (in and out!) Or even mixable inputs in machine, but no treatment

- 128 of polyphony, but there's a quick tip using the preset sounds that mostly use four layers: an agreement to use four fingers played 16 polyphony nothing to him!

There should be more information on the amount of storable sounds and sequences in a little lower Machine ...

The use of the machine is very simple.

The manual is a bit big, but everything is clearly explained, with tutorials on the synthesis, etc ...

The screen is a bit tight, but it is enough to show the current settings.

The 16 pots on the left side are multi-functional, and pretty good bill finally. And above all: they send and receive Midi.
They can be used either volume or pan for parts of the sequencer, and then more or less correspond to what is writing to everyone for editing presets.
In passing from one to another of their duties, a red LED indicates lorsue we brought the knob to its current value.

The machine is manifested through LEDs when modified a preset or pattern to encourage us to save in the process, otherwise we lose everything.

I do not think the overwhelming sequencer, and am much more broken than the MPCs, a much more comprehensive and user-friendly.

The pads are not, as one might expect, pads "MPC-" but rather a kind of keys that can sink. Them an octave can work at any time and not necessarily connect a keyboard master, but ...

I've never been to the OS updater that I could use the Command Stations from E-MU.
However, I often quickly reaches the limit of polyphony using only presets, have already saturated the internal memory after just thirty recorded patterns, and even other kinds of bugs. But I may be a bad manager.

The sound is very nice and E-MU.

I got this machine and other Command Stations and repeatedly.

ROMs are all valid for the given style and still have some sounds to troubleshoot.

In this case, I've never used the XL-7 using only the original ROM: B3, Vintage Collection, Protean Drums, and the most general of Proteus, and a number of strings or orchestral, I do not know.

The presets are great starting points, and the pots can often help to quickly do the rest, without necessarily going into the programming of the bike.
Personally, I use such groove machines for just the instant appearance.

In short, a very nice Groovemachine, but that takes a lot of space anyway.

Its controllers are a definite advantage for bosser quickly, but it still has some bugs that make it unreliable for live performances.

Besides this story of power supplies that get cooked one after the other, and without any connection with their place of manufacture, as would have us believe the legend.

So a super ROMpler multitimbral, but may be eternal prefer a more serious sequencer.

And OCCAZ i lvaut better try to find that the power supply has burnt and has been replaced by a more reliable, it would avoid that you loose hands (frustration) and that damage to other parts of the beast, which is always possible.

The sounds are in the spirit trs varis tech-house-electro etc. .... just brilliant but trs well done, big sound for most especially if we go back all in moog filter example! For my part I use flash ram that allow me to sample via an ultra emu and to make my own banks!

I've had eight months and uses it mostly for Live, the sequencer is excellent execussion fast, since the price has dropped it in my opinion the best quality price, with regard to the possibility trs are pro, I had nothing wrong .... if the price of blank Flash, but still the cheapest on the market (400 euros for 32MB against the same price for 8 mo at akai)
Trs trs good machine

elektrospace's review (This content has been automatically translated from French)

ASEZA easy to use, the manual, I have not had personal needs

The sound is powerful, beautiful tablecloths, the effects are not too bad Ormis the distortion

I have two years, I am rather satisfied, price quality ratio is the best of all grooves machines but beware of failures, the power supply and not very strong, the individual parts are quite rare or else must have so much time, I am experiencing !!!!!

Did you find this review helpful?yesno
»
Read the 7 user reviews on the E-MU XL-7 »

E-MU XL-7 manuals and other files