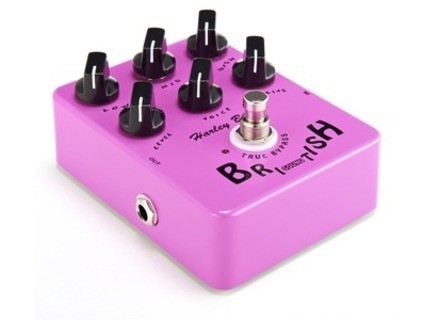 Psygnosis's review (This content has been automatically translated from French)" Very good surprise!"

The pedal board has a 3 band EQ, volume, gain and a evel a knob that can be associated with a sound coloration or presence in more explicit ... very useful this knob!
The pedal is extremely easy to tame, it begs to be used!

the audio is extremely surprising! 30 € I was not me great illusions and I admit having bought more out of curiosity than conviction ... and listen to the first I saw my opinion (it was late and could not grow amp too ....) but it pierced mix well, had a marshall grain and undoubtedly a fan of sounds that allow it to land on almost everything (blues, rock, classic rock ...).
The next day by connecting a normal volume, and what is clear: it is excellent. the sounds are balanced, it reacts to the guitar knobs, it has character.
Only downside, do not push down the gain or tone ... under penalty of having a buzz ... yes! she snores not bad ... nothing that corrects probably with a noise gate (I have a vintage pedal 70 which is the same ...) we need to know, but for me rin redibitoir especially as it is not necessary to push 10 ... everywhere it is the morality taf stride and what sound!
It is possible to parallel the price finally convince € 30 ...
The case is metal, the knobs and switches are good, the sound I was looking for!
I bought the small american sound (pedal version of the same fender), but is less fan saturations fender ... well I prefer him british tone.

I've had a few weeks (months actually) and it always turns nickel! I do not regret SWNB acquisition, impeccable quality price sounds excellent brief in my case I was really pleasantly surpsris especially as I do not give to winning start ... there are the idiots who do not change their minds if I bought it out of curiosity and for the price I originally concretely care for the sound it delivers.

SlapKid's review (This content has been automatically translated from French)" Phenomenal!"

Harley Benton British Truetone
5
In fact I bought 4 of the series as they are released (119roros total ...), with the idea of ​​making four separate preamps via switcher.
First point capital, no simulation hp board (you know, the one that makes everything unusable on SansAmp amp).
Then powerful equalizer, easy power and visibility settings.
Volume available.
All this applies to all four of the series.
True bypass, no sofa beds in conventional use.

It's very simple to use, and really effective. Moreover, a lot of little nuances available squaring the circle quelquesorte.

Frequencies are very well chosen, the voice button is imperial in that it goes from plexi jcm 900 or more is amazing efficiency.

In conjunction with the drive if both are 15hr or more it brings back a lot of background noise, so we will rather stay in the amp and distortion pedal not register, so I speak.

Tain sound ..!
This is alchemy marshall in all its glory, it is very fine-grained-sensitive villain a treat ab-so-lu buddies!
Plus you have total control of equalization, it really happens something when the button is rotated.
For the price you will not get better on.

The Twinhead artec yet very correct not only racing there and I SansAmp (triac Triod, GT2) are the picks because of their simulation hp forced there as well but that is classic it is sorely lacking in EQ.
So the British truetone is a real gem, and still in use!

The series of four is by far the most exciting and the most desirable-essential.
I failed to mention that the clean sounds are also possible with with the dry side dish and the unsaturated English brand. Once you mess the sound is imperial.

You can purist with it and head to class as MOOER, and it sounds like hell (hey, 230 roros all!) Without breaking the ears.

Short as buy one or two while they are in the catalog, verdict: absolutely recommendable!

jofal62's review (This content has been automatically translated from French)" A wall of marshall in your apartment!"

Harley Benton British Truetone
5
It is clear, this pedal is used to emulate a Marshall Plexi therefore useless to try something else, Harley Benton fate of other models to imitate other types of sounds.
The technology must be analog?! The conventional connector jack / jack.

So I've been looking for years Marshall Plexi sound (I play mostly AC / DC, I finally found the pedal to replace ALL the equipment I had and I fired! (Multi-effects) or ( disto marshall boss sd1 + compressor + equalizer + reverb) I have only this pedal in my blackheart killer ant the rest: OUT!
nomal: 3 knobs for the EQ very readable (at her)
1 level, 1 drive 1 voice
in 1 minute I was playing "Shoot To Thrill" with the feedback that goes on the intro, the "roar of marshall in short foot!

manual: a useless sheet in English.

SUMMARY: can not get easier and easier.

100% realistic effects in a small ant killer Blackaert volume up with a Gibson SG (it helps)
volume very low on the pedal, play in a room with any reasonable voulme the desired dynamics = the dream of players apartment.

I tried this stuff before distos marshall pedal, boss multi effects, I had come to play in the amp without preference or guitar rig. here, who wanted to sell my amp for a classical Marschall 5: I care.

the price of the pedal is given. 29 euro
Quality is at the thick metal casing appointment, potentiometers serious, soft-to-use
universal adapter works perfectly

if it fails, I bought two!