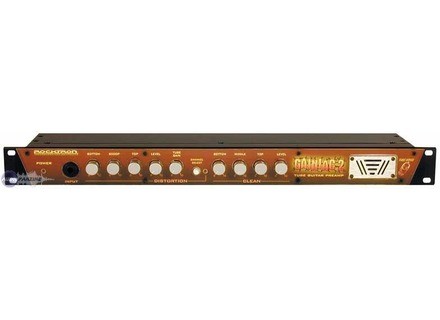 alexflowter's review (This content has been automatically translated from French)

Rocktron Gainiac 2
5
Pramp is a lamp (a 12AX7).
It was on this MODEL up to 100dB gain (tration) on the channel distortion.
Ultra simple:
-Input
-Output
-Footswitch.
There are two channels, one clean and one distortion.
I put 9 because the original lamp (Sovtek base) is a bit lazy, with an EI of 100dB we really gain.Manque an effects loop.

The clean I like it (easy rgler), it is neutral but warm with good basses.Pas problem of finding a clean clean! lol.
Lacks a reverb

Saturate is the nickel, with the original lamp (sovteck) rglage the gain is not anything to del one-half is a good adj grain with little more light.
Once the gain rgl30 seconds), the scoop can get sound dsirheavy metal, rock, pop, metal), then the bass and treble are ffective trs.
Manual useless.

The interface is very simple and purer, a me plait!

This pramp is perfect for me, simple, effective, and it bites! RRRRRRRRR! lol

For me is saturated with the EI 12AX7 rvele (gilou board), the gain will bottom, the grain we exchange a lot of his raproche Dimbak Darell (gain bottom, scoop in position m dium well digging). It's not for everyone!

The metal is done! But not only the rockers and other bluesmen will not be left to the width of rglages mdiums and gain. Small BMOL for blues, the grain is well-typed Rocktron's not as round marshall That a lamp.
But the old rock has been 60-70, and the heavy metal.

Rocktron is a registered plutt East mtal rock, jazz or blue so it is best to take a marshall.
I put 9 because a mesa was hard when even more!

has been a month since I have, and I love it!
The harmonics do not ask that out, the palm mute is imprssionnant (though my microwave are only mounted on a Duncan Designed jackson, they are not active). The sound gives a synthetic hair original kernel, nothing to see with a metal zone!

I tried a Distortion DS1 and mtal area, far outweigh the gainiac.
I tried a peavey ultra addition, mdiums of this amp are a bit dirty, so I prfre the gainiac for mdiums but the trunk is the peavey supreur (all-tube).

Excellent price quality ratio: 176 in Germany, while other brands can get dressed.
APRS least one I did not change my mind, thankfully! (It's good stuff)

Only regret: one triode lamp is used a larger lamp section aurra hard or at least the two triodes of the lamp. But the price would not be the same either!
I put a 9 because even when hard!
Did you find this review helpful?yesno
»

Ggekos's review (This content has been automatically translated from French)

Super easy to use you turn the knobs and when it sounds good c
The manual is fun but is of no use except to know the other Rocktron (exelente: d)

I play metal and electro my config is as follows:
Fat Start and mounted SH6 SHTR, Gain! Ac 2, 8008, baffle 1912.
In saturation, I spend a pe its very very low and medium typed with a hollow sound typical of the medium in the metal knob magic "scoop". The trasheurs regret that leaves a very acute criada if pushed, others will be thrilled.
Clearly, the manufacturers in rocktron it had the great idea to put the lamp in the channel was clear and that makes the difference with the gain! Ac first name. Initially I bought it for the saturated (a preamp c not to cook an egg) and in the end I fell in love with the clear sound that is perfectly adjusted through the EQ with the knobs.

I have now for 3 months. I bought it online after testing. And it's really a great preamp for a price so small. The single lamp is truly present and the sound is pleasant and not flat like transitornounets. Now that my little config is complete I think this preamp is perfect: d: d I rachetrait immediately and even more expensive

Injured Angel's review (This content has been automatically translated from French)

Rocktron Gainiac 2
5
This is a multi purpose 12AX7

both channels clean and distortion controlablent is a small white button ugly ass either by foot sw, I plug it on the fcb 1010 behringer

So there since I bought the 2 gainiac, I'm really a fan, I use images with this one and a jackson epiphone. Since I coupled my and my Rocktron gaignac 2 expression, the sound I get really helps to have a sound professional, as if it cost a cd.

In terms of clean, it's really prcis, ca does not bleed, with a good chorus is impressive trs.

The most important button is undoubtedly the scoop (medium) that makes us pass from blues to heavy metal.

I'll probably change the lamp, which for me does not give all that can produce gainiac 2

Without a doubt I would do this choice was not all means (especially me) but it worth it with the term.

I would put a 9 because it would prfr rverbe with at least one but hey, this is a distortion not a multi purpose

DamsUniverse's review (This content has been automatically translated from French)

3 rglages per channel (bright and saturated) with that of "Scoop" for the distortion (which behaves as a Medium in the end ... are funny Rocktron)

In terms of connectivity, the ADI is a bad start: There is a mono output (normal so far) However, the low point comes when the couple at the Velocity 100 (meaning be compatible) because the velocity is STEREO ... So it feels more nitpicking if firm has a `mono.
For my part I had to go turn my stereo and mono cab home from the power amp PREAM thanks to a split stereo. Too much nitpicking finally ...
The solution is to buy property on the Xpression (between 300 and 400 a few prs) that between mono and stereo ... Marketing Powaaaa!

Well, for the config, as we quibble ...
For the saturated channel you really turn the knobs carefully because I really feel that this thing silent super sensitive. More I get confused if albeit with a different type of amp (connect => EQ = just> play).
Regrettably illustrations of adjustment in the manual, which explains how to connect the big dance hall and how to pair it with the Xpression.

I put 2 / 10, one point because we still sound even when you plug the guitar, and another because there are knobs.

I play mainly speed and symphonic prog ... fans of this style, do not dwell on Gainiac!
I searched for months (without EXAGRES) how to have a sound not too low, clean and friendly ... dceptions that ...
T until I even buy a distortion pedal in addition to not use the lamp preamp! Always the same problem: it sounds "relatively" good rhythm in serious but it goes into soli ds: eurk, a grain that horrible for me silent.
Cause: mediums without contour, treble too piercing
Solution: bin is the medium rather hollow ...
Reproblme: The treble even meaner and titillate the eardrum
Resolution: bin we dig a little treble
Ultimate problem: there comes a sound "shut up in cotton wool", and that, even with low RULES ...

I frankly puts a 0, because for 400 (+ gainiac velocity, not to mention the firm because there is nothing for him) I've never met does.

So I bought this Pramper to May 2006 (I had the velocity command in February, he arrived in late April).
I too wanted to quibble with such a configuration, while a good head classic Fender or Marshall would suffice.
Besides, you guessed it, but I succeded to resell all, and I try t FM100H a Fender that I like enough (280 against 400)
The preamp is not suited my style of music, and AC I've realized the resale, because the guy who came with quite able to take low shoots almost thoroughly, but c is valid only in the powerful rhythm (the guy played the death) so apparently it works for this kind of thing since he is left with.

I will never do it again this election. (Even with a voodoo valve from Rocktron mfierais .. I too now)
Update March 2009:

And yeah It's been a while but I could not dvaloriser this contraption while I realized that the sound could not come from him.
I explain: after all this time, I totally changed gear. In the era and a few months ago I was playing on a Marshall MG412. I've never had to complain, I used it with a fender head FM100h. I recently bought a head Randall g3, I am eager to tap into my box Faithful ... and l. .. the "sound" that I experienced with the Rocktron Gainiac. DEFINITIONS before telling me that hybrids Pramper lamps taient DEFINITIONS shit, I got myself a Framus V30 with it ... and l. .. miraaacle, the excess frequency drives ears acute attack was more l.

THEREFORE, possibly redo choice but with my current box, I'm curious to hear the sound of Gainiac with my Framus, I think it should do

See all 69 photos of Rocktron Gainiac 2 »