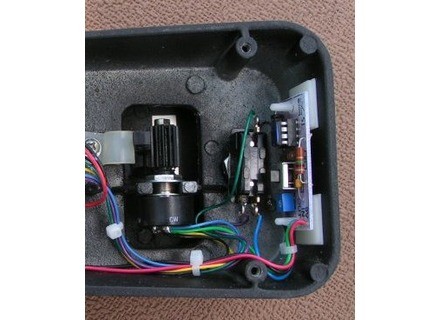 Stratophil's review (This content has been automatically translated from French)" For a perfect wah!"

Area 51 Output Buffer Mod for wah pedals
5
Kit to add to his wah wah pedal, be it a Dunlop or a Vox, which has no output buffer.
An output buffer allows:
- And should control the level of the output signal
- To ring a Fuzz Face pedal kind after the wah

A potentiometer to adjust the level and a switch to completely bypass the buffer.

A simple manual explains the operation and complete:
- Unsolder 2 son
- Soldering 4 son
- Adjust potentiometer with a screwdriver to find the ideal setting

Really excellent!
I installed this kit on my Vox V848 Clyde McCoy. This pedal sounded great already, but was a bit too garish and slightly saturated in the treble. The wah does not sound at all before my fuzz ...
With this kit, the level is mastered, the wah is nice and creamy while retaining its character. The fuzz is finally magnified by the wah.

I now have the wah wah pedal of my dreams!