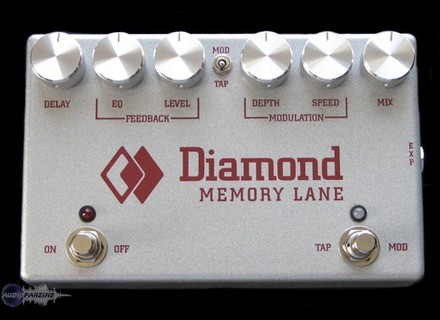 Diamond Pedals Memory Lane
5
Made in Canada, this is a great delay for if you liked the old Electro Harmonix Memory Man Deluxe, Memory Man...Memory lane..get it?
Controls are delay time (up to 550 ms), feedback amount (how many repeats), feed back eq (great for shaving off top end for a tube tape echo sound), switch that assigns the second foot switch to either function as a tap tempo or to turn off the modulation and give you a regular analog delay), and a mix control.

Obvious approach is my Strat or Tele into some overdrives into the Memory Lane into a Black face Bassman. However in addition to the regular in/out jack you have a kill-dry delay only out when you want to use the delay in your amp's parallel effects loop.
And my personal favorite is the expression port, not to use with a volume pedal to control the amount of repeats, although that is nice to have. But rather to insert another effect in the feedback loop, such as a Boss Octave box, to drop the repeats...and the repeats only by an octave.

How does it sound? Like a modulated analog delay should, swirly, gorgeous lush repeats. Analog heaven. Unlike my old Electro Harmonix Memory Man Deluxe that was noisy beyond believe, unusable in an effects loop...this has the sound AND the design was smart enough so you can actually make use of it.

If you like analog delay you'll dig this. If you like modulated analog delay you completely freak over this.
Regardless of whether you like delays before the amp or in the effects loop this will make your day and put a big smile on your face.
There are analog delays out there that I can work with like old Ibanez AD9, or the Carbon Copy from MXR, but unless you throw me an original Roland Space Echo, or better yet an Echoplex, this is what i will grab for most any gig.

Diamond Pedals Memory Lane
5
This is a rather high-tech analog delay pedal. The pedal has a standard 1/4" input and output and can be powered with a 9V adaptor. I don't think that there is much in the way of editing with this guy, there's no way to hook it up to a Mac or a PC. This pedal is also not rackable as it's a foot pedal. This is a 100% analog pedal.

The sound effects editing on this guy is actually a little bit more in-depth than some of my other favorite analog delays, however, the pedal is actually still quite easy to use overall. The manual will explain how everything works pretty well. The actual pedal contains six knobs. There is a knob for Delay, EQ and level, and then a knob each for Speed, Depth and Mix. There is also a switch that will allow you to adjust the way the pedal works. On the mod setting, the delay knob will control the delay time. On the tap setting, the second switch will adjust the delay time. This is a pretty cool feature, especially if you want to adjust while playing.

I think that this effect is a high-quality analog delay. There are a lot of features here that I don't see much on an analog delay pedal. I think that the EQ effect is really cool. This knob will adjust the EQ of the delayed signal as it plays. The original chord or note that you play will have the EQ of the signal that is going into the pedal, but the delayed signal will slowly drift higher or lower, depending on where you have the knob. That is cool. In general, the amount of knobs that can control the mix of effects is really cool, it allows you to get some really thick, spacey sounds that can dramatically enhance your playing. It's also one of the best pedals for making crazy sound effects that I've ever seen, which is fun for all the noisemakers out there. The modulation effects make these possibilities, and the tonal possibilities in general, far more varied. In general, this is a pedal worth checking out.

I like the vast amount of technical features on this delay, as well as the really warm and smooth sound in general. I think that for the most part, there are cheaper delays than this, but the price difference isn't the most drastic. If you want a warm sound that has a lot of capabilities, I'd highly recommend this pedal.

Using the Diamond Pedals Memory Lane isn't complicated at all.  The parameters that you've got to work with include delay, EQ, feedback level, depth, speed, and mix.  You've also got a tempo tap feature with a button for it, and a switch to choose between either mod or tempo for this button.  If you have any experience with delay pedals, you won't have any problems figuring this one out, and even if you don't I think you should be able to figure everything out.  I don't believe that a manual is necessary as I haven't ever felt a need to look for one.

In my opinion, the sounds possible with the Diamond Pedals Memory Lane are pretty great.  It definitely has the warmth and analog feel that you expect from an analog delay pedal, which is a sound that I always seek with a delay pedal.  You have a good amount of control over your tone with all of the different parameters available, which is great because the makes the pedal extremely versatile.  Having the modulation section with speed and depth is unique to a delay pedal, but offers some really cool possibilities.  I've used the amp mostly with a Fender Strat and a '76 Fender Twin Reverb for recording, so I'm definitely getting an accurate read on what the pedal sounds like.

Aside from the price, the Diamond Pedals Memory Lane is nearly a perfect analog delay pedal.  Even taking the price into consideration, when compared with some of the other analog delay pedals out there, it falls right in line.  If you're looking for a top notch analog delay pedal, you should definitely try this one out in addition to a slew of other ones available from the likes of companies like Moog and MXR, as they both have some great pedals as well.  I'd encourage anyone interested to go down to their local shop and try them all out if possible to see what will work best for you!

Diamond Pedals Memory Lane
5
This is a form of cho analog pedals like a picture that has shown an SETTING THE modulation with speed and depth. A power is supplied with. Cho time to maximum is 550 milliseconds more than enough for a cho practitioner.

You plug the guitar into it, you leave the amp on the way to the Analog chos Nirvna of the rglages are childish for who knows what use a gun. There is a manual (in English) for those who have no intuition.

The MODEL in the photo is version 1, since the firm offers a version 2 with tap tempo and possibility to switch the foot between two effects (delay 1 & 2), as a command by the time dlais the button on the Casing the other by tap tempo switch. Latrale also provides an outlet to plug in an expression pedals CONTRL for the feedback (number of rptitions) and another the speed of the gun. A small switch can pass the pace in eighth rptitions advanced two-mode delay or slap back delay mode 1. At the indoor one can also find a rglage that allows to adjust the sensitivity of the pedals to amps effects loop.

Is it necessary that all of prciser true bypass is to say that he does off dnature no signal.

Branch in an era of Vibroverb Fender Stratocaster with diffrent we reach perfection. The sounds are ample, warm without being dnaturs the cho is beautiful.

First, I want prciser possde I do not this amazing effect, but having had the opportunity to try it at length, I fell madly amoureux.J 'in happen to have a command that the end of the year. You should know that Diamond Pedals is a small Canadian Socit manufactures its pedals by hand with carefully select components. The solid construction is a guarantee of quality and durability. I possde a J-Drive Mk3 which comes from the same manufacturer and I did that myself Congratulations for choosing this (I also post a notice on this site on this pedals).

Obviously, the price is not the door of every budget, but it is related to the remarkable quality of this device that I think has only competitor for the Fulltone Tube Tape Echo ( worth a whopping 1234). Besides the price, I think the advantage over E. Fulltone is the user does not read any problem using cho band (which is magnetic heads tisent, moving band that dmagntisent, distend the Crant wow, etc.).. With the Memory Lane we are left with a remarkable effect and we will not want to change sitt. Here the delay is not a simple effect but becomes vritable a musical instrument.