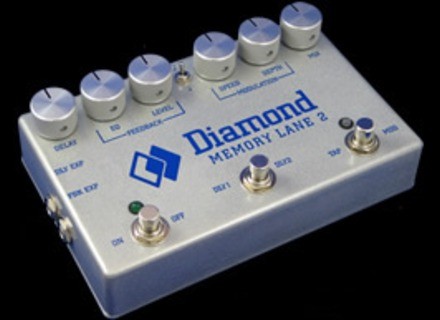 All user reviews for the Diamond Pedals Memory Lane 2

This is one of those pedals that requires a little bit of time for fluency of operation. You will need to figure out which channel can be tapped in by foot, which one features modulation more prominently, which one can be switched over to dotted eight repeats, etc But once that is all figured out, you are pretty much set, and it sounds fantastic. This is another one where you probably want to read the manual pretty thoroughly. 550 ms isn't really a whole lot of delay time, but it is definitely usable.

I don't really need the two delay channels, but if you do, its a pretty cool feature to have.

Note that the dotted eighth switch will not actually change the delay time. You need to flip it, and then tap in the tempo again. Took me a while to figure this out, I thought there was something wrong with the pedal initially.

These are built incredibly well, and carry a lifetime warranty. The guys are Diamond are simply fantastic to deal with, no worries there.

Really just an incredible delay pedal. Very lush, warm repeats that gradually crumble away. The modulation is just perfect. Doesn't get wonky or too crazy. If you're into absurd amounts of oscillation, open the pedal up and flip the spaceship mode switch, you'll get more than you could possibly use.

The tilt EQ feature is really cool, it allows you to regulate the extent to which repeats are dark or glassy/bright.

There just really isn't a whole lot more to say about it. It is as close to perfect as you will find in an analog delay.

Pretty much the kind of delays in my opinion. Yes, I know people rave about the Echoczar. But I am just not willing to wait 5 years for a pedal, or pay upwards of 1.5k for a used one.

These aren't cheap, but used prices are a little less intense at between 4 and 500. Other good options are the earlier original Memory Lane (just one delay setting, no dotted 8th notes, and sent into oscillation a little easier) at about $300 used, or the new Memory Lane Jr at about $280 new (used ones aren't really on the market yet).

But if you can afford it, this is the one to get.

Diamond Pedals Memory Lane 2
5
This is an analog delay with a maximum delay time is 550 (nearly one second), which comes in the form of a pedal powered by a transformer (supplied by the manufacturer) of which 18Volt are then internally regulated at 15 volts. It has full connectivity: instrument input, mono output mix, output "delay only" (delay only), two stereo inputs for connecting expression pedals to control the delay time and delay time (feedback) . On top of the box there are six knobs that adjust: the delay time (delay time), the tone of the delay, the delay (feedback), the modulation rate, modulation depth (rotated counterclockwise-clockwise, this knob cuts the modulation) and finally the mixing effect with the original sound. Three switches have the following functions: initiation of the effect, choose between Delay1 or 2 and tap tempo. LEDs light up in different colors depending on the use of either / both of the switches. A small switch changes the delay between two delay or delay in the black dotted eighth, another switch behind the pedal allows delay to pass the two-mode "slap back), ie with a lag one repetition. Inside the pedal, there is also a switch that allows high-low, engaged in high fashion, to the echo oscillation. Also within a rider to optimize the sensitivity of pedal if it were to be subjected to very high levels of entry.

Despite the plethora of settings, the Memory Lane II is very easy to use. Is connected and it sounds live. There is a simple manual but quite explicit comes with (obviously in English, too bad if you have not worked a language of Shakespeare to your school).

Imagine for those who know a Memory Man Electro Harmonix home that would have more opportunities, less breathless, more solid and above that would sound ten times better. Again with Diamond Pedals, you get to Nirvana. The sounds are warm, loose, organic settings to great effect. I confess I do not use the modulation part, but having tried I find it quite remarkable too. That said, I expect u make me echo echo, for chorus, flanger vibes and I have other pedals ... A frequent criticism echoes analog signal degradation, here we have a signal that moves organically and naturally, o is very far from the clinical side, cold and unnatural echoes digital. Mode "oscillation" may be fun for those who want to impact how SF films of the 60s. Used with Fender Stratocaster, Heritage H535 on a Mesa Boogie F50 or even my Martin D28, I have an echo that returns a true musical instrument or a machine to make music and not a digital machine that cools my sound.

Having had many old tape delays, and electronics and then digital with Line6 DL4 (which is an outstanding product in this range effect), I can only congratulate myself for having "cracked" for this pedal. Handcrafted in small batches, it is not really a gift, but still costs almost 3 times cheaper than the Fulltone Tube Tape Delay, which remains today and in my humble opinion, in terms of analog delay, the only alternative worthy of the name. I tried version 1 that had me fooled, I did not hesitate to buy this pedal I was lucky to find Used but in mint condition (thank you Yann!) To a prices "affordable". Pros: Fabulous sound first then the possibility of having two different delays, the feedback control by pedal, tap tempo, mode slapback, the robust housing, the fader size large enough to be rotated without needing a magnifying glass, the seriousness of the manufacturing ... The least: may be the price, but it does not give any work worthy of his hire and that there is absolutely no stealing, on the contrary. Then on a pedal, it takes a little space: 18.5 cm x 11.5 cm x 6 cm, but the ransom to pay for an echo quality. Lost, stolen, damaged, I immediately buy the same without any hesitation, for me is one of the best delay on the market (with the Fulltone) with perhaps the advantage of not having to maintain read heads and stuck with me because wow band tired.