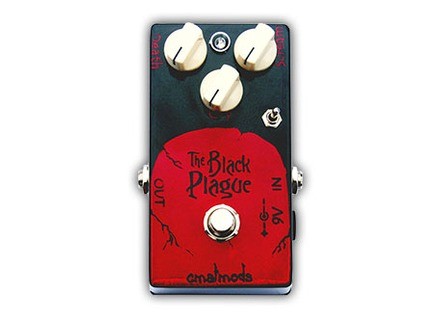 CMAT mods Black Plague
4
This company started as many title company start nowadays simply as a modification company that would take your existing Ibanez or Boss pedals or any other type of pedal and modify it to a better standard or fix any issues that it might have. This is the way many boutique amplifier company start out as well by simply modifying Marshall amps or Fender amplifiers to their own specs or features. This company is called Cmat mods so he carries that modification name in its title. This is one of those petals that has a distortion type effect.


The black plague distortion pedal is a cool sounding pedal but certainly nothing that you've never heard before. This is a pedal that has three control knobs with a true bypass switch. It uses all military grade wiring and his hand-picked match parts for tone and pure durability of the pedal. This panel has three control knobs named death, cry, and scream. It won't take you very long to figure out what each control does what. Most of these overdrive pedals have three controls such as distortion, level, and tone, and that's pretty much what these controls are actually controlling. One of the cool features that this pedal has, and you're starting to see this more commonly used on boutique pedals is the true bypass switch. This allows the user to bypass the true bypass switch many true bypass pedals have a clicking sound when you engaged them. Plus people are starting to like the non-true bypass sound that comes from many effects pedals as well.


This pedal comes in new right around $140. That's not a bad price for a great sounding boutique hand built pedal. It has a nice paint job on the front that features a tombstone that is cracking . In my opinion it's a great sounding pedal for the money and it sound great as well. You will like this pedal and if you ever have a problem with any of your other pedals than I would suggest picking this one up.

CMAT mods Black Plague
5
It is an analog distortion based on a pro co rat (lm308n chip is regarded by many as giving the best result on the rat) with some modifications.

Three knobs (tone, which acts as a filter rather than a normal tone, gain, level), it is familiar ground, a switch 3 positions (three different types of sound).
With the 3 knobs and 3-position switch, one reaches a very wide range of sounds.
Note different volumes depending on the position of the switch that can compel to adjust with the volume knob to keep the same output level, (but that's normal, and found the same phenomenon on the pro co rat modified by Robert Keeley or version BYOC example

pedal really sounds great and is very comfortable in the field of large well-saturated distortion and also a good little crunch, the sound can be very thick pleinselon and be civilized settings or turning down the gain, it is also worth noting that this is a pedal that responds very well to volume declines on the guitar (to go from crunch to distortion).
The pedal responds very well with a nice presence in the bass but also who can be incisive treble never give in garish.
All styles of rock are available and a lot of other music too.

We find the characteristic sound of a good rat, it's super cam and more cmatmods it really gave a value for money breathtaking ... nothing wrong & %&%&%&% clone pro co rat classy