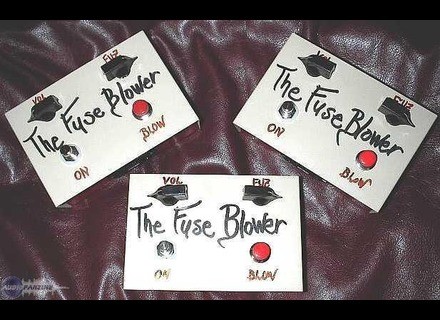 MacB's review (This content has been automatically translated from French)"The only one made in France FUZZ class!"

6 buttons:
- Blow 1: control bass frequencies
- Blow 2: control medium and medium frequencies called acute
- Blow 3: is a kind of control which adds more presence of fuzz in the overall sound, with an addition of high frequencies. It also allows the monitor.
- Flight: Volume
- Tone: Tone, fits in association with "blow 3", creating a more or less acute, screaming or less, I almost quoted Jacques Mercer creator of this pedal "like a tube screamer"
- Fuzz: adjusts more or less saturation fuzz

For once a manual is clear and concise, the Essential nothing more, nothing less. Manual in English, but all "made in France", therefore English very accessible!

From the moment we understood the functions of knobs that looks like it is "plug and play".

- On the control "Volume" past noon, we are in the Fuzz slobbery, destroy so big muff or fuzz years old 60 to the MC5, Stooges, Who, before noon, fuzz drier, less slobbering in a spirit British the LED ZEPPELIN, putting more bass you can type in the BLACK SABBATH, or even the intro riff and a bluesy versions of the song by the Beatles REVOLUTION Goerges Harrison. At 9.45 am the fuzz eat somewhat a mute signal sets, which can be handy for playing in an apartment without bothering its neighbors, or if you choose to associate it with a bigger fuzz, distortion, to create an effect of "address" of the saturation.

- Control "tone" adds treble screaming around noon and after that drool while remaining mastered (nothing to do with a Zvex Fuzz Factory or OCTAVIA uncontrollable fuzz), the feedback controlled worthy of slobbering fuzz, one can easily come to the frequencies a song like Cherub Rock Smashing Pumpkins, with the only fuzz pedal (knowing that Corgan uses two as true!)

- Control "fuzz" reacts similarly to the volume, it sends afternoon, it explodes, it greatly fuse before it is drier, more controlled.

After you adjust all the knobs with frequency control, I do not have an opinion on how they should fit, since it will depend on your equipment friends.

Effects are realistic, we are both a distortion / fuzz organic, a really good fuzz to the former.

Whether they say it well, it is not a vintage fuzz (it&#39;s not all about marketing the vintage Fultone, T Rex, shops and other brands, it is not done with germanium transistors components or even imitated it meant!).

It must be in the following reasoning when we have this pedal in the foot and that you wish to use: if a fuzz should be made today respecting tradition, which is to make fuzz entirely analog technology (without bullets, without micro welding machine etc ...), while adapting to modern techniques of making good pedals so the hand step by step this is how it should be done, as this fuse blower.

We can all do, Hendrix, through the MC5, Stooges, The Who, Led Zeppelin, ZZ Top but Nirvana, Bush, Pearl Jam, Smashing Pumpkins, Muse, Kyuss / Queens of the stone age and even metal to Kirk Hammett of Metalica the ... It covers all sound fields known to Fuzz.

We can all do as I say, but BEWARE, it is very powerful while being controllable (so do not worry), plus the amp is right behind the microphones of the guitar, the better it is, the more powerful it will be It will give all its potential, unless the equipment is ... Fuzz react all very well for good manufacturing analog, but its effect, its potential to appreciate much better on a good amp, type Mesaboogie, old amps time series fender reverb guitar and good!

I use both a telecaster american standard 2012 upgrade with TV Jones Classic pickups (those fitted to the White Falcon Gretsch in the U.S. that Gretsch product in the USA by special request, since all production in Japan and South Korea) and 2008 EPIPHONE SHERATON of Korean Sung Ung Matsumuko, upgrade with TV Jones pickups POWERTRON developed in partnership with Billy Gibbons of ZZ TOP. All this connect with mxr analog chorus Zack Wilde, an MXR boost custom audio, tuner, and amp FENDER PRINCETON REVERB 1965 blackface / orange.

A note is perfect for the solo rhythm like no worries, according as arpeggio, it is what is asked!

I use it for two months. Before I had a BIG MUFF I temporarily removed the benefit of the Fuse Blow, I keep you never know! (Loud is not enough!). I tried signing SLASH model of fuzz from MXR, too modern, too cold, not suitable for a soloist, as it reacts with beautiful arpeggios, but no agreements, so for a rhythm like me it&#39;s not worth it. Also models, FUZZ TECH 21, and a similar pattern of a mark in the same spirit (VISUAL SOUND), the sound was artificial, cold and stuffed inside Deplus digital technology which I hate!

Ends for good quality / price ratio for machining non-standard, handmade, point by point and more in our country, France, Jacques Stompboxes is a great brand, scale, well designed in workmanlike Go ahead, try before but mostly, it&#39;s a tip if you have to IBANEZ, FULLTONE, TREX, EHX, and other brands. The Fuse Blower is an excellent alternative to all these brands pompous, high-end consumers who slaughter the musician. There has unfortunately not everywhere, it is possible to control the net, someone looking for a really good fuzz sound versatile organic quality without bleed financially, while having a high quality range It can go with your eyes closed.

Note that I do not know this model in Jacques Stompboxes is a pattern of the mark with the distortion / fuzz actual brand, which rather good news for musicians who play with good equipment.

With the experience so far I remake this choice obviously.

sonnyscallywag's review (This content has been automatically translated from French)

Any con, 2 knobs, volume and fuse (fuzz).
A switch to effect a switch and "blow" to change the fuzz.
A battery compartment for easy ejectable

The sound of this pedal is absolutely amazing. has relatively sound vintage but is a trick that I could detect which gives it a more modern look. C is short and this same aggressive with the fuzz has zero or one gets the impression that a lot of distortion dj.
The knob "blow" engaged enough I notice 2 points negatives but does not affect me so much data across the grain of the pedal. Indeed, the switch triggered the sound does not immediately develop negatives and 2nd mode "blow" has a fairly low volume (listen to the sound I think the fuzz is more compressed on the coup bah volume as well). I can not put 10. But frankly, given the sound of two ways I am too thoroughly for me, is to attach importance. Then you have to see.
The amazing thing with this pedal is that c volume on the background guitar fuzz to death and that the one passes down a bit on overdrive genial and further down the volume has changed over to get a clear very crystallin through a crunch super hot.

ESPECIALLY NOT COMPARE WITH THE FUSE BLOWER TRADE !!!!!!!!!!

Well, the thing that will make everyone hallucinate c is that I had the opportunity to try fuzz quite incredible ...
A Shin-ei FY-2 to era (that used by Radiohead), a Shin-ei fuzz wah of era, a vintage Jimi Hendrix Fuzz Face (the black MODEL) and even (brace yourself) a Colorsound Sola Tone Blender era (notably used on Ziggy Stardust) and everything about him even Mr. Jacques. I liked everything but I was missing something.
Then he told me this pedal which makes it silent in a pot Repair Tool for he who does the asking for 2 years.
And then I flash me about selling me this one, saying he would do one for his buddy. Moreover the pedal has no problem (the problem of "Blow" as a default to pedal at the base said Jacques).

So bravo mud and Mr. Jacques

Other names: the fuse blower, thefuseblower