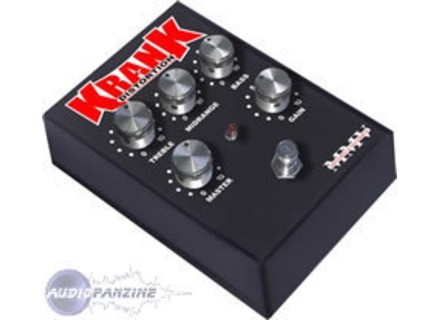 All user reviews for the Krank Amplification Distortus Maximus

sickfuzz's review (This content has been automatically translated from French)

The case is solid and barely bigger than a Boss, the buttons are aluminum, the footswitch is a 3PDT mechanical standard and the pedal is true bypass.
4 rubber pads screwed like those dunlop wah ensure the stability of the pedal.
All this contributes to the impression of strength and to provide good mechanical stability to this pedal.

Until the electronic circuit and component selection, everything was done to the image of their amps and with the same quality problems except two points:

First access to the stack since no trap, use a screwdriver and unscrew the back plate and then the absence of electronic protection and filtering of power supply, what is bcp most serious cases of error handling or use of a PSU that filters bad so be careful.

In my opinion this pedal is perfect for those looking to add a level of saturation of the gain or overdrive light scratching a bit at the distal large sharp metal lamp.
The rendering quality will depend greatly on the amp used, but the constant and more clarity and precision that heat even if the pedal is not lacking.
I guess on a transistor amp without too much focus on the settings you can quickly get to sound hyper aggressive and cold.
Lamp with an amp it is very close to the grain krank revolution.

The sound or sounds rather have a character close to a Marshall JCM800 boosted with more shiny and clean bass, very good high gain sum.

It's a pedal that is well designed and that stands out from what is available elsewhere on both the electronic and the noise level.

Having been open, the electronic circuit is designed very intelligently and provides a consistent saturation while retaining good definition and little compression which may not be suitable for all the world and that means above all a good dynamic and airy sound.
It was also a great opportunity to gain control with the volume knob on the guitar.

While walking on their flower beds, it is far from a metal box or a metal muff, which both have much more compressed sound eq but offering more opportunities.

I must say I was a little amazed by the quality workmanship, sound and versatility of this pedal it would be a pity to confine the metal sounds which she excels.

Those who seek the grain of krank revolution series or a good channel high gain modern and precise, this pedal is for you.

Having said all this does not justify the price I think nine of this pedal.

kenshiro974's review (This content has been automatically translated from French)

Krank Amplification Distortus Maximus
5
Analogue distortion pedals, makes the United States, the case feels solid and good in qualitalimentation 9V, however, little problem with the buttons, the button level has remained in my hands and Obviously you need a allen cl (a little) to tighten everything, but nothing very good mchant, but hey I drop a little note: let's say 9

Setup is extremely simple, 5 knobs, you branches, you run and you're mine jou ocaz did not buy the manual, but hey, I'm not REALLY need a red LED illuminates when the effect is switched on the box is a bit big, but it does not impede me!
CSTA however the battery is in dvissant 4 nuts under the pedals, which can seem a bit boring over time, because not too easy to ACCS, but hey, I 'uses a one spot, so in my case I forget the battery power!

Finally it comes the essential: the sound is excellent! I have a full amp lamp, laney lc30II, that does not really saturated channel thus I use the pedals as Krank saturation, I can tell you that it is doing its job, the 'trs legalization is progressive, the sound is clean and super sharp prcis the headroom is more than enough, I can get well for my heavy rhythm, for his lead, I glue a TS9 upstream (booster wholesale) history to have more gain, I am satisfied with TRS! with the wah wah over, the foot, frankly, I tested a lot of distortion before: ds1, metal zone, Marshall Shredmaster etc., but none can hold a candle to my krank, fan m tal edge, it is for you, a real killing

I use it for a few months, I was looking for a good distortion (or a real channel plutt saturpour my amp, I am more than happy, I love the sound, the look, the simplicity of r tings, however small problems with the knobs that you remain in the hands bore me a little, but with good cl rgl the problem quickly!
I tested a lot of the pedals before that, none of them convinced me, too showy, or lack of personality and gain, krank is perfect for my use.
I would do without this choice hsiter! I love it!
Did you find this review helpful?yesno

sephiroth-grinder's review (This content has been automatically translated from French)

Krank Amplification Distortus Maximus
4
Analog distortion pedal made in United States
9V power adapter not supplied by
the pedal is a bit bigger than my electric hamonix Holy Grail, so it's clear, is far more imposing than a boss pedal niarf niarf
the pedal is stored in its cardboard box tailor-fitted with its warranty card.
good overview

Solid metal casing hyper, no worries about that, against a knob by unscrewing when the machine is new it's not necessarily always fun, especially when the knobs are set by two mini-screws that need a "mini key Hallen" and there Luckily I had the key to tuning my BC Rich Speedloader, the Supreme loose come upon one who has none ...
5potards, in fact it looks like a normal channel amp head, one treble, one midrange, one bass, one volume and a gain ... after you arm it on your clean channel and its fate!
no manual but hey, is not out of St-Cyr on how the machine works, after all it's just a distortion pedal!

-Then there is the problem in May I think the pedal has nothing to do but rather that it comes from my universal adapter: a constant buzz and strong enough, having no noisegate effective, it sucks the block ! it's weird though, my DS-1 Boss from home with the same adapter does not have as much buzz!
I tested on a small amp transistor 20Watt and my head H & K trilogy tube, its clear, no effects added, the bug is well spit watts without a doubt! is finicky, it finds its (not his SON not veronica lol) and off you go and that's where I have personal blocked! too low for me, its not accurate enough, note that I am still far from being a sound engineer but when Also, I thought immediately found a sound of death that kills, but nay ...
the sound is clear, however, stands out more than the ultra sound of my head trilogy, and yet it is what I was looking for originality, but maybe I'm just a fan of his vintage hehe ...
I put 6 because it sends personal but it did not rain!

1 week of use but I'm still not satisafait, I tested a lot of material, it is clear that this pedal sends the puree, but you have to like that sound new-generation, personal me the guitar that disgusting low, I am not too fan, I have a bass player and I respect him

try it yourself anyway, is s personal view as I would change one day, but now I like my work and my midrange treble ...
otherwise good stuff and apart from the scope of this resistance knob under the foot, it's heavy and it has in the belly!
Did you find this review helpful?yesno
Cookies help us improve performance, enhance user experience and deliver our services. By using our services, you agree to our use of cookies. Find out more.