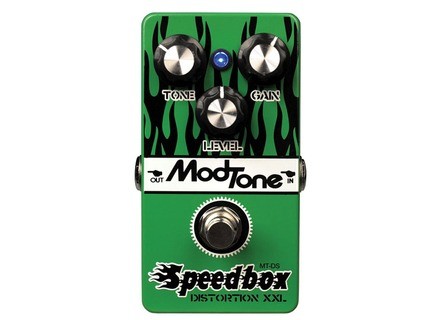 Modtone MT-DS Speedbox Distortion XXL
5
Firstly I reassured about the level, I put it between noon and one o'clock and I use microphones rather muscular, so there SPEEDBOX in this volume. Problem of defective series and no bowl to my colleagues?

Simple I can not see. Finally, if, as the tone should rather be called spectrum. What is it?
Turn this knob is not that removing sharp or not, it changes the entire sound spectrum, like my ds1 actually but better this than the affected frequencies are more realistic. More the bass is better filtered SPEEDBOX (ds1 the drool too, a true St. Bernard!).
No problem in normal use, it is designed as it is in a quiet equalization fate.
It is not for manic setting, rather like rocknroll attitude.

It sounds really great! The grain is not too late, mediums are flexible like an overdrive, and everything is good / not drool.
Question class is quite like his roots but not that. Ideal pedal for hard rock / instrumental because she sings well, and has good sustain with the gain half already.
The tone in practice is well done, turn a bit to suit his guitar / amp and no longer think everything is fine.
It is based a box, in that it does as well as the power of the blues hard rock, power chord solo that without touching the settings but just by varying his game and its selector. I never touch the volume elsewhere except for the violoning.

Versatile casually, and stack between his roots and accuracy say very modern, successful.
Compared with my danelectro cool cat metal SPEEDBOX is more flexible and relaxed, more natural. Compared to the VT999 bebert it is simple SPEEDBOX out much better in the mix and offers more rough, character.

Great price, great looks, great sound and I do what I want with nothing touching the settings (once found my course marks), a sacred success. It adapts well to different guitars and works both input vox da5 that ibanez tsa5tvr or home studio chiadé system.
What is an accomplishment in itself actually.

Test the store to make sure everything works, as always ...

fafard's review (This content has been automatically translated from French)

Modtone MT-DS Speedbox Distortion XXL
3 knobs: Tone, Gain, Level.
A bypass switch.
Maybe allimenter a 9v power supply or a 9V battery
It's a bit annoying because to change the battery, it was the dessou unscrew the pedal.

It's simple, like the boss! We rule the desired gain, the desired tone and balance it with the volume level between the effect and clean. Quesqu'on can say more ...?

The distortion is very good! It's amazing! Depending on the gain and tone you can get a wide range of sound! The gain in the background that one can drool. I do not put in the back anyway! The bypass is very good,''click''without embarrassing: P I use it with a Jackson and buche!

I've had biento 6 months and I use it very often accompanied by the ds-1 boss its been good also. The pedal is great! Little light is flashing blue lights of a so it is or it is during the show! <img class="smiley" src="https://fr.audiofanzine.com/images/audiofanzine/interface/smileys/icon_lol.gif" alt="" />

2 negative points: it dribbles the gain in the background, and the battery is difficult to access!

The rest is perfect <img class="smiley" src="https://fr.audiofanzine.com/images/audiofanzine/interface/smileys/icon_biggrin.gif" alt="" /> !
Did you find this review helpful?yesno
»