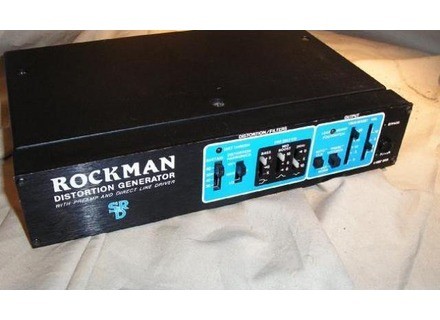 Rockman Distortion Generator
5
Analog Distortion. See the chart of skyblazer54 very full for a full description. I had to tinker a footswitch bybass who was not there to buy (used). My goal is to rack (size 1 / 2 1U), but there are no mounting location on the front, there also must be tinkering.
The model is 1987, mine is 87.

It is relatively simple but difficult: the EQ is active (while still keeping the same color tone). It must be one or even two or three sounds in general config stuff, that no more quiter, I come back later. I do not ask him any more.

NB: I use it exclusively in the effects loop of my amp (Fender Cyber-Twin), front audio is shy and Cracra, which is not the purpose of the product.

Beware, the machine tends to blow a lot ("the rattle of the beast!") On the same humbucker, unless my copy is faulty (I do not know else to compare, not on my config thrust and transplanted, it is not a major problem.
Proud of my newly acquired toy, I tried the stuff to see some friends (and especially to show them ...) and then disappointment, it does not sound anywhere as well. Better to have a real effect loop to operate, as well as the right amp: it is very "eighties", no need to plug it into a Vox AC30 or Orange (I also like personal) not mind. It does not sound all the guitar to try before.
The dynamic is enormous, even with the tone knob on your guitar to zero. The audio portion as never before in a mix is ​​very incisive. It is at once rough and rather gutural when playing alone. The sound is also very interesting turning down the volume of the guitar, but not really creamy but sweet nevertheless. I forgot (!): Sustain huge ...
The bypass includes the phaser makes her more conventional, which may also be useful.

I do not see how to use it outside of a record 80 years, which delights me personally, but will not suit all. I do not agree with the opinion stating the multiple sound palette of the machine for me, there is really a sound, which can vary the settings, but the color remains.
I was however surprised with beautiful, finding sounds casually known, is whether the rockmann had his moment of glory ...
I use it for 6 months, 80 color and architectural sound quality have profoundly shifted my game lead.
I stumbled upon it but I do it again without hesitation.

tuvok's review (This content has been automatically translated from French)

2-Output section
- Switch: auto cln
- Switch: phase notcher (which is actually a simulation of a 4X12) and the interaction of two switches give you a total of 4 colors Different.
TREB-boost
-Volume

At the rear:
Bypass-jack output (via a footswitch to bypass)
Lead-output boost (a boost for activated via a footswitch with viewing on / off LED on the front).
-Output
-Input

Very easy to use, no menus here and even fewer by menus, as easy as a OD pedal actually.
It is the ancestor of DI boxes saturation, the base is Designed with a view to plug into a mixer without going through an amp and my time, it works very well.

A precision, the guitar is in between instrument and line level signals.

Of course it's all we are far analogique.Ici product lines 6, the typical sound of distortion of the 80's, many used it, the Rockman was given a big kick in pedals at the bottom of the Japanese 'era.
I had a DS-1 (Japanese) that time and the Rockman got a contribution A veritable "food of some oxygen," finally! distortion in a "box" that sounded.

The sound is much warmer, than I POD 2.0 for example, and without the cot "synthtique.
It is especially Designed to connect directly to a mixing desk (this is his favorite fields) hi-fi sound.
On a power amp or guitar amp direct Pramper, the result is correct but less happy.

Nickel for rock, hard or heavy, the sound can be also very "singing" in the context of use melodic line on a game for example.

The sound is very saturated typ (we like it or not) but inimitable (the guitars on Nougayork Claude Nougaro others) also no models on the Line 6 DM 4 is due! !
If you want the grain so special, buy you a Rockman is the only solution.
The grain is rich in harmonics, complexion medium rather strong but without being loud and aggressive, but rather round with a long sustain and a conversion of the notes in this same feedback contrl and low / average volume, it is very easy to hang a note contrlable feedback.
Triturated can sound "in every sense" but the basic tone color remains sound ,.... Rockman what.
The Distortion Generator comes from the distal part of Sustainor, but its even more extreme in saturation and sustain (if needed) but less plbicit the era as Tom Sholtz (Boston) used the Sustainor.
A classic distortion, availing oneself completely (from my point of view) for a magnet DO DIFFERENT various grains and wanting to broaden range of sounds "saturated".
Its a very typ which may not appeal but in any case it is inimitable, is sure.
I have been using 88 is yet I have two lamp heads Plutt correct.

All products are top Rockman qualitla brand produced high-end analog products constructed fawn semi industrial ddi specially the guitar.
"All" the scratch of the eighties have utiliss Rockman at least once in their life.

I use it for 22 years and the particularity that I like most is his single grain.
Warning! I RPTE, we like it or not because the sound is very typperso love.
I bought new between 1500 and 2000 .... the ball era!
C'tait "expensive" but 20 years after it works like these beginners, yet believe me, he turned his tourntournet re-sod, as sturdy as the Boss pedals.

For info, thank you for this site Jark, Jark specialist in both the global (and french)
Rockman, approved by him even Sholtz.
https://www.rockman.fr/Menu/Menu.htm