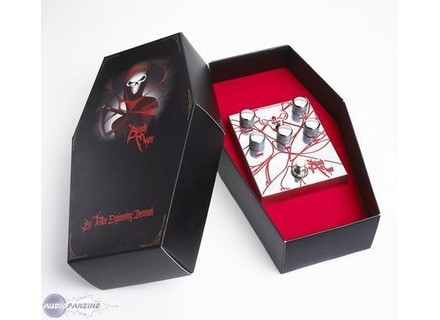 T-Rex Engineering Bloody Mary
5
Primarily a singer, I've been playing guitar for about 10 years, been in a band (drummer!), and have continued to record and play with other musicians on a non-professional basis. My styles range from folk to hard rock, with heavy power-pop leanings -- Big Star, not Green Day.

I bought this effects pedal at Truetone Music in Santa Monica, CA for $250.

For years I had hunted for a distortion/metal pedal that could deliver the kind of organic, dynamic, versatile tone that I wanted. I've used the Marshall JH-1 Jackhammer for years, but it sounded too metallic and wasn't what I was looking for. The Electro-Harmonix Metal Muff was a tremendous disappointment, sounding artificial and harsh rather than rich and responsive. I finally happened upon the Bloody Mary and it's precisely what I wanted. It delivers a complex drive tone, and it is extremely responsive to the guitar. I've never had a pedal that was this responsive to the guitar's volume and tone controls, my own playing dynamics, and the pickup selection. Turn down the guitar's volume and suddenly you have a juiced-up clean tone; hit the strings harder and you get extra crunch. The EQ controls on the pedal are very easy to control. This is also the only distortion-type pedal I've found that can make my Telecaster sound good at high gain settings.

At $279 street price, it's definitely not an inexpensive piece of gear. I think it's worth it, since it can liven your clean tone, provide subtle distortion, or go to full-on crunch. It does the job of three of the pedals in my collection. The battery compartment is a bit hard to get at, requiring a flat-head screwdriver. The input and output jacks are in a strange place, side by side at the top of the pedal, so access is not as good as with most pedals.

The best overdrive/distortion/metal pedal I've ever owned, and in fact, just about my favourite effect pedal, period. Despite its heavy-metal name, the Bloody Mary is a versatile pedal with loads of personality, great adaptability, superb response, and great sound. It's the kind of pedal you can leave on for an entire set.

Using the T-Rex Engineering Bloody Mary is a really easy task as the pedal is easy to follow and has pretty basic parameters.  The pedal has knobs for gain, level, low, mid, and high, as well as a button for body.  I've never had too much trouble using this pedal because it has similar parameters to other distortion pedals out there.  Even if you aren't too experienced with distortion pedals as long as you experiment and try things out you should be able to get a handle on this pedal pretty quickly.  I haven't seen a manual for this pedal, but you shouldn't really need one anyway as the pedal is easy enough to use on its own.

Out of all of the T-Rex Engineering distortion pedals, the T-Rex Engineering Bloody Mary has the most gurth and is best suited for heavy rock music.  I have used the pedal with a '76 Fender Twin Reverb amp and a Fender Stratocaster or a Gibson SG for the most part, so I'm getting a pretty accurate portrayal of what this pedal sounds like.  I especially like using this pedal with the SG as you can get a really fat tone that is great for harder rock music or if you are just looking for a really heavy distortion rhythm or lead guitar tone.  While this pedal isn't all that versatile and is rather limited in the types of tones that you can get, the sounds that you can get are pretty great.

victhebig's review (This content has been automatically translated from French)

Y samples along with trimmings on the site of t rex Denmark ...
It may sound to Pantera Death Metal, no prob

I do not play metal, punk instead of alternative
So with a simple micro fender it lacks a bit of attack in the palm mutes.
As against a double ibanez pickups it rocks.

A real good distortion pedal format. It is very rare in the world of pedals to have such quality of sound. Forget Boss, digitech and other DOD! There is quality, and it is given for the price! (Well the money is not given, must win ... mamaaaaaaaaaaaan)

Anonymous 's review (This content has been automatically translated from French)" What is the problem?"

simple a priori as a pedal, the manual sucks, the problem is that I believed to be defective, in fact, the disto starts around 3 hours and the level should be at the bottom, would have to send a bloody thomann rotten?

therefore difficult to judge, yet AC looks pretty with the character on the other hand in neck pickup is a horror boiled without a name .... hey thomann you change me? danke

well if it works normal bof bof surprised that it's expensive and only the aspect that is class I change my mind when I have a new
Update: thomann me to replace, and mm problem, it can at this price I never buy t rex

Did you find this review helpful?yesno
»
Read the 6 user reviews on the T-Rex Engineering Bloody Mary »