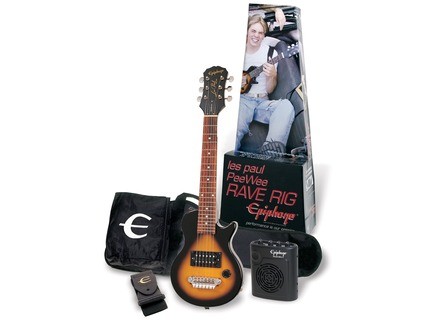 Epiphone Les Paul Pee Wee Rave Rig
3
The Epiphone PeeWee package is a great little rig for someone looking for a small and easy to carry around package that has the feel of a Les Paul, at least somewhat anyway. It's basically a half sized Les Paul copy that has the general shape of the bigger models, a 19 fret neck, standard sealed tuners, a wraparound style bridge and a single humbucker pickup wired to one volume control. It's pretty simple, but it's meant to be just a basic instrument for kids just starting or perhaps to take traveling or leave at the office. The half size scale is hard to get used to if you're of normal stature, but that's to be expected. The quality isn't bad, but the guitar does have some tuning issues, especially if you try to tune it down to concert pitch as opposed to up higher. The hardware is decent but not stellar, and the stock pickup really doesn't have any remarkable traits. It comes in a package with a basic little bag, a cable, other accessories and a basic little amp that, while simple, gets the job done. The pair of them work well for a starting rig for kids. I got mine when I was just learning to play at age 4 and it served me well until I got a big bigger and upgraded to a bigger guitar. If you don't mind the tuning issues or cheaper parts, it's not a bad little instrument pack and if you want something that looks like the real deal Les Paul, it's your best bet.
Did you find this review helpful?yesno
»

Aksak's review (This content has been automatically translated from French)

Epiphone Les Paul Pee Wee Rave Rig
4
Made in China, bought yesterday in Ukraine, Kiev (142 Eur). Can not seem to find in Europe. The price was for the pack, including the guitar vintage sunburst color, a 1W amplifier 9v battery operated, adjustable volume and tone, an overdrive function, but especially with a headphone jack, which was crucial for me, the cover for the guitar and amp (front pocket for the amp), the strap, a cable and some picks.
The guitar looks fun but does not look like a toy either. In a way it&#39;s mouth.

22 frets, close relative to a standard round. As against the neck width is standard. Humbucker with simple a priori a humbucker.
Fixed bridge. Standard tuners. The guitar must be tuned in a special way to stay tuned. Can not be setting a standard guitar, unless you change the strings for 012 or 013 (what I will do soon).
Woods used for the body and the handle? Impossible to know, even on the Epiphone website. The fretboard is rosewood.

I bought this guitar to be able to practice while traveling. It&#39;s not my main guitar (I have an Ibanez SA120 which I am extremely happy), but for practice and fun, it should do, especially if I get to the tuner normally with ropes with a caliber different.

Update 24/04/2007: the little Pee Wee was released a week ago at the local luthier. It has installed 012 round jazz chords. The guitar is now tuned as a major, which is more convenient. He also set the action and adjusted the bridge as far as possible (I recall that the adjustment possibilities with the bridge that I have are more limited, two small screws at each end of the bridge used to remove these ends more or less mounting screws of the bridge, in other words it allows you to adjust the intonation a little cords, particularly cords of an extreme-and 6 - but not to refine rope rope ). But a bridge type + tunomatic a stop, it was a blow to almost 100 EUR extra. We&#39;ll see if I keep this guitar for long.

The handle is nice. The rear of the handle is painted and varnished (which changes with respect to Ibanez that I practice rounds so far).
The access to the latest freight will be a little tricky, given the size of the neck and frets are as close together.

Ergonomics: the guitar is light, but not too much either. The body is mini mini, probably easier to play standing than sitting.

For sound, yet no idea of ​​the potential. The demo in the store, on a big amp was not bad, but the tuning was quite difficult (the guitar was set in standard tuning, which is not recommended for Epiphone strings class 009).

I&#39;ll start using it this weekend, the amp comes with (but I doubt that it is amazing given the size of stuff) but also on the Roland Micro Cube and Cube 20X that we have.

Update March 30: I have played. Hard to earn the equivalent to a normal guitar sounds clean. In distortion is pretty hair. The interface is fun, and the worst is that it becomes quite addicted to this guitar. For now, always want to catch it for a moment at the end of my session daily, to draw some sounds, be it for fun.

Update April 24: with 012 strings and setup done by the luthier, it becomes almost playable. In any case, I confirm that it is fun.
We must play with the settings of one volume knob and volume and tone of the amp comes with mini to get good sound. And also affects the strength of picking a lot. The humbucker does not seem nil. I look forward to come home to connect the small Cube 20X and see how it goes.

For what I wanted this guitar (the guitar travel the most convenient and most interesting in price), I think this will do Pee Wee.
I will play with his amp on a trip, on headphones. And the Roland Cubes at home.

For sounds, I will write a further review later.
I do not expect the same quality of sounds, sounds the same as those I have with my Ibanez SA120

Update 3/30/2007: The amp comes with is not really great, we&#39;ll have to learn to fine-tune for travel.
I think more seriously about this updater miniature Les Paul with good mechanical (Schaller, Goldo, Gotoh?) And a better bridge. Daddario strings in addition to the 013.
At first a blow to 100 EUR more, through the local luthier (which should be much cheaper than in France and better than a Polish plumber).
Played on one of the two combos I Roland, this is really fun PeeWee. I do not regret (yet) my purchase.

Update 24/04/2007: I confirm that the guitar requires a minimum of extra work to be almost correct. The cheapest to start: changing strings of origin for 012 (less tough for the fingers as 013). And try to adjust a little bridge of origin, possibly by changing the small screw home for longer (what my luthier Slovenian).
The next update, it will surely be mechanisms for a finer tuning, probably 1 / 16. And finally, if finances permit, a real bridge.
All updates included, it would amount to a kit for almost 250 to 300 EUR. A bit expensive for a guitar as a child, it may seem a normal price compared to real guitars travel that are even more expensive, not to mention for the latter the price of a mini amp and more (40 to 70 EUR ) or multi-effects pedal on which connect the headphone (type ZOOM G1, also from 60 to 75 EUR).

Yesterday, the first intended use of the future.
What I like most about this guitar is its size, weight, in short its portability.
What I like least, maybe the fact that the tuner fault + high as normal, unless I can set it in standard tuning after installing ropes 012 or 013.

I tried the Ibanez Mikro GRG21, which is much better, but is 10 cm longer and what I wanted, it was really the portability of the instrument.

The value for money for the pack, is really correct (142 EUR), the quality seems normal.

At the moment I am happy with my choice.

Update of 24/04/2007: a journey now, after retrieving my Pee Wee a week ago just before leaving, I confirm that I am happy to have him with me. In addition, it&#39;s great to play relaxing after a day of appointments and drive.
What a pity that this guitar is not distributed in Europe!
Did you find this review helpful?yesno
»

zjulos's review (This content has been automatically translated from French)

On mine it took me imperatively to resume the frets dremel mini version grinder
it overflows a little too much and Y'avait enough to hurt my hands
since it is much better ...

It's not a real guitar but played ...

I've had ten years, bought 600 frc the pack with cover jack mediator 1W amp and even the strings on it for the price,
this guitar can be great for the kids, and adults too, with a small multi purpose y 'what a joke, a good bass distortion and a big amp, you will not believe when you realize that a lot APRS is not the DCON, to share travel light, to provide for his child or be a clown, do not believe in drawing wonders ... though! is not the bike that makes the cyclist it seems ..