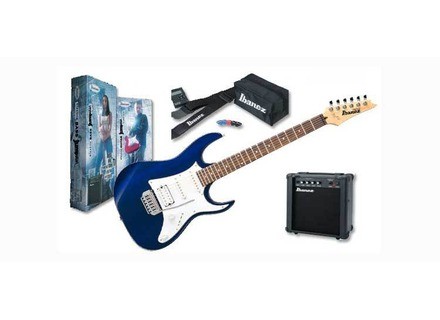 GRX40J, Guitar Package from Ibanez in the Jumpstart Package series.

Ibanez GRX40J
4
(Originally written by Chroune/translated from Audiofanzine FR)
- How long have you been using it?

I bought it secondhand in April 2008.

Cons: you want always more, no cons if you're a beginner!

Update, 15th March 2009: average quality pickup, they sound too metallic and have a low dynamic range. After only one year I started having fret noise, even with new strings...

No, I got it at a nice price so I tested it and took it.

Good value for money if you buy it new (I found it secondhand).

Secondhand, yes. If I had to buy it new, I would try out other guitars before.

Update, 15th March 2009: I lower the grade from 9 to 7! It's a good guitar for beginners... But once you are more experienced and demanding you'll have to buy another guitar (I personally bought a Mexican 70's Strat...).
Did you find this review helpful?yesno
»

- How long have you been using it?
I've been using this guitar for about 3 years. It is my first guitar and I haven't purchased another one yet.

- Which feature do you like the most / the least?
I like its look even though it's not the prettiest on the market. I also like the price a lot, which is very interesting for a guitar of its type! The neck and the frets are quite slim. The left hand can slide smoothly. The weight is reasonable. You can carry it for a long time without aching. I only feel its weight after rehearsing several hours. When this happens I need to take a break to avoid shoulder aching.
What I like the least: The pickups are nothing special, but I guess it's normal considering the guitar's price. The sound is really lifeless so don't expect to play nice solos with it... It isn't worth listening to. It's the same with the amp: really cheap product and unfortunately I'm still using it. It is supposed to have 19 Watts but its output power is really poor. A friend of mine has a Micro Cube and I can hardly hear myself when we play together. It is definitely the weakest part of the pack because the guitar is ok for a beginner.

- Did you try any other models before buying it?
No, it was a birthday present from my brother. At the time I was an absolute layman but I figured the pack couldn't be top of the line because of its price. It is definitely for beginners.

- How would you rate its value for money?
Very good except for the amp. The guitar is still ok after 3 years. I know a guy from another band who has one and it sounds pretty good with a decent amp.

Based on your experience, would you buy this product again?
Definitely not. It's just a beginner's pack. After a while you'll have to get a better set (although I've been playing it for 3 years now). I play mainly heavy metal and this guitar isn't the best for this kind of music. I currently play in Children of Bodom cover band, and I need a better instrument. Right now I would choose a Jackson or an ESP. If you are a beginner and buy this guitar you won't feel ripped off. It's ok to play rhythm guitar (a beginner won't play any solos anyway).
Did you find this review helpful?yesno
»

lefebve's review (This content has been automatically translated from French)

Ibanez GRX40J
5
The mechanical equipment is seriously a bath oil 2 single coil pickups and one humbucker ibanez vintage vibrato, deprobleme likely to change the strings but one by one, the finish is clean, the amp no background noise only tarnishes the signal guitar, you need a good earth if not a lot of snoring, with the cord jack too short and not so good, very good cover, good chromatic tuner, strap very well, Meditor
I used the last two years
the particular feature that I like most, the least? the handle is great for small mains.le least the 10w amp
report quality / price 200 euros all 10.A no danger to his bank account
With exprience, always the same choice
Did you find this review helpful?yesno
»

biscui's review (This content has been automatically translated from French)

Ibanez GRX40J
4
Hi all I use this guitar and this amp for several months already and I am very satisfied. It is quite suitable for lovers of hard rock and metal pop rock etc etc ... I try the metallica, acdc, hendrix, and even from satriani after some time. It is designed for beginners who want to invest in the guitar. It provides access to easy high notes, good sound asser powerful in the bass, we slide very well on the handle, it is not too heavy. It possesses some defaults recess as little sizzle in some positions of micro, high notes not always "clean" and a vibrato that gets tired quickly. For the amp is rather powerful amp for a pack he never tires and is always at his level without forgetting that this is just the amp pack! That is why the RAPORT price / quality is very good I urge you.
Did you find this review helpful?yesno
»
Read the 14 user reviews on the Ibanez GRX40J »