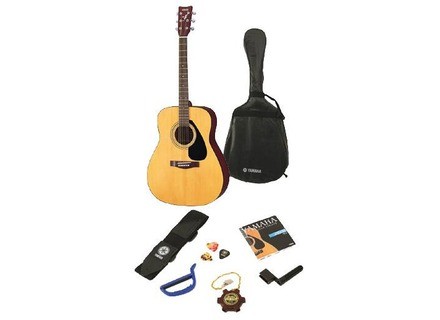 F310P, Guitar Package from Yamaha in the F series.

Yamaha F310P
3
I bought it off samedaymusic.com for 155 bucks or so. it was my first guitar, I wanted to learn electric, but I started off with this one. It came with a pitch pipe, 3 picks, a thin gig bag, strap and some strings. I upgraded to better strings, got a stand, and after losing one bridge pin outside(don't ask) I ordered new bridge pins.

i like that it is my first guitar, and it has a deep sound when played. It also it very loud, with a good bassy sound.

This guitar has extremely high action. I can only play for 5 minutes at a time. I have been playing for 15 months(electric and acoustic) and I have substantial caluses on my fingertips, but this guitar cuts right through them. I cannot barre on this guitar. I would take it in to get the action lowered, but frankly, I don't even know if it would be worth the money(40 bucks!) I play mostly my electric now, but i play my acoustic many times too. I bet that if I had bought this guitar in a music shop,(it was 50 bucks more expensive) its action would have been perfect. The acoustics in the shop had action as low as my electric! So I rather can't say.

The guitar also buzzes somewhat on the bass strings.

This guitar is made very well. I have banged it and dropped it (all accidental!) many times, and it barely has a mark on it, except fingerprints.

All in all, it is a good first guitar, but I would buy it in a local music shop. The extra price is worth the low action they set it too. Other than that, this guitar was a good deal. I don't plan on upgrading it (i just keep entering contests on music123.com and musiciansfriend.com to win a new one! I know, i am such an optimist.

Hey, Vegas does that to you!)

Yamaha F310P
4
It's a good guitar for beginners, especially since it is in the pack with all the material (cover, capo, pick ...) and does not cost very much. For experienced players, go your way!
At the sound, rather it has good bass and good treble, it is between the two lies the problem. But given the price range, it's still quite acceptable.
I made my arms over there and quickly took his foot. I changed my guitar after a year, but I reused occasionally.
For those who want to start with a proper instrument without breaking the bank too, I think it is a good choice.
Did you find this review helpful?yesno
»