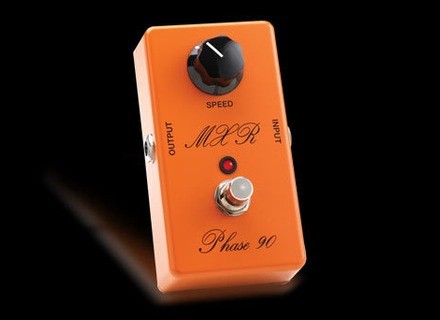 CSP101SL Script Phase 90 with LED, Phaser for Guitar from MXR in the Phase 90 series.

MXR CSP101SL Script Phase 90 with LED
4
The MXR CSP101SL is a newer reissue of the Phase 90 original script logo version made in the seventies and used by players like Edward Van Halen. The subsequent block logo models made in the later seventies and through to the present day are more "chewy" and present sounding than the script models and thus not as desirable as the older ones. However, they can go for a pretty penny for an original script logo, so eventually MXR came out with this reissue. It's pretty simple... has one control for "speed" (modulation amount) and some newer features such as the LED and AC adapter jack that the originals lacked. However what it lacks in features it makes up for in tones.

Setting up this pedal is pretty simple for sure. It only has the only control knob, so you aren't left scrolling through endless presets or turning knobs. It goes from a very subtle sweep kinda like a modulating treble boost to full out phaser fury, depending on what sort of sound you want. I like to run mine at about 9 oclock for that nice Van Halen esque treble boost for my leads or as a nice sound changer for my clean channel.

I use this pedal in my main gig rig with my band as something that really alters up my tones for a bit of added flair. It has a sound that is much closer to the original Script Logo models. The one major flaw is that it isn't true bypass, so it does make a fair bit more noise than I'd care for. That being said, it sounds like a good phaser should and is definitely more subtle than the block logo models I've tried. If these were true bypass, they'd be unbeatable for that classic phase tone.

All in all I think the MXR Custom Shop Phase 90 is a great pedal for someone looking for that classic phaser tone in a pedal. It's not as versatile as some other units, but I like it much more than the block logo models and if it was true bypass/less noisy, it'd be near perfect. At about $110 new this pedal is a decent deal for someone looking for the real MXR sound and is definitely worth checking out.
View price information
Did you find this review helpful?yesno

MXR CSP101SL Script Phase 90 with LED
5
I have played quite a few phase pedals and there are some great one out there. I really like the A/DA phasers and the stuff you get out of TC and Eventide. For me though I think it was about simplistic value. I am a very big fan of Eddie Van Halen and so getting something that I know he used was the way I was going to shop. If you notice the price I paid may seem high. I bought this from Analogman it is the hand wired version with added true bypass and LED. I have owned this pedal now for about 3 years and it has never failed me. I use this pedal often and has been on my pedal board since inception.

It has a great range or sweep of phase that goes from simple phase to pulsating phaser. It only has one knob and it is as simple as it gets. It takes a 9v plug in.

One knob for control and that is all you need with this pedal. You would be surprised of how much variation the sweep range has with only one control. It isn't hard to figure out you have to use your ear to tailor it to your personal preference. I generally keep mine around the 9:00-11:00 range. It is somewhat subtle in this range but adds a nice sweet element to your overdriven tone.

There isn't any need for a manual with only one knob.

The tone is perfect for me. When I engage it, it doesn't cut the volume of my original tone like many pedals do when engaged. That was a big selling factor for me. Since it doesn't have a volume knob I was a little leery of how good it will work without a volume control, but it has a great unity volume standard in the unit.

I have used this with a number of guitar and amps. The current rig I have this week is a Les Paul going into a Splawn Quickrod and going into a vintage Marshall 4x12 with blackback Celestion speakers. I run this pedal in front of my amp. It sounds good in the effects loop as well but I think these MXR phaser pedal sound best in front of the overdriven amp. I many times couple this with a delay and I get some great early VH tones. I used a Wolfgang to get those tones.

This pedal like many of MXR's is so simple and easy to use. They as a company don't get to crazy with many controls and options. I think the tone of their products have such a sweet ranges of tones that I don't think you need a group of different controls. At around $119 this is a great priced pedal. If you need something simple and that will get you a great vintage phase tones than this is your pedal. If you want something with a little more options and for funky effects that take phasing to a whole new level then grab an A/AD phaser reissue.
I would recommend this to anyone who wants keep it simple. One knob control is very simple and you'll love the tone you get.
View price information
Did you find this review helpful?yesno

MXR CSP101SL Script Phase 90 with LED
5
R-dition almost identical phase 90 of the 70's, which is found indcents prices on the internet.
Offer 2 versions: with or without LED.

I pass, RAS, has not changed since 30 years!

Wow! From Hell! I love phasers, I had a few! I had a phase where i was very happy with 100 especially for arpges the 70's Pink Floyd ... I chop it into cash sell it, mechanically, I tried once: fatal error! OUCH! The Holy Grail of phasers!

I thought "shit I like him my Phase 100, with its rglages waveform!" Well, I've sold, and I kept it! Doing anything, the Phase 90 custom sounds much more silky, warm, organic! ... It jumps to the ears IMMEDIATELY!

In short, the price is a bargain! When I think of those who go for a double dpenser the original script logo with the volume pot and paint scratches that that flies, while it was strictly the same sound, I'm tired!

T says it all!