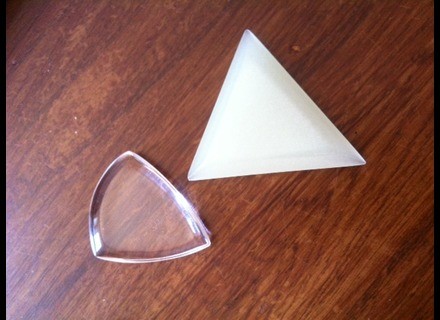 A review of 2 new Hufschmid Picks.

a Plug for Patrick, not only is he a nice guy, but he continually strives to make better products,
use non traditional and traditional materials
http://hufschmidguitars.bigcartel.com/ follow the link, and check out some of the options for his picks and plectrums.

i am going to review 2 picks, the NEW Acrylic Attack III made from 'cross-linked cell cast acrylic'
and a HufGlow attack II made from 'HufGlow' material.

The Acrylic Attack III is rounded and comfy, it slowly tapers to the edges making for a very fast and
very hard attack, it really sits well between finger and thumb and always feels controlled.

The HufGlow Attack II is triangular, pointy with smooth tapered edges, again, due to the thickness
it has a hard attack, it really is quite comfortable, surprisingly so.

The Attack III and the HufGlow Attack II both have a similar feeling attack, the Hufglow being the softer of the two
and plays acoustic lovely without breaking strings, on Electric a more Jazzy tone from the HufGlow Attack II definately
surprised me and it's bright and gives some really good articulation, easy to pull of pinch's and sweeps with ease.

The Attack III really comes into it's own little area of dominance with some gain on an electric, a hard attack,
really pushes a tight controlled sound, few overtones and the brightness of the HufGlow but with an added depth
of warmness, nether sounds harsh against the ears, plugged in or not. if you attack the strings at slight angles
you can get some lovely softer and more mellow attacks, really versatile and good sounding tone from both.

In summary i will attempt to not only conclude these picks, but really the whole Hufschmid Pick collection,
not all players will benefit from these picks, but they are not a gimmick, i've been playing these picks
exclusively for over a year now, and ALL the picks have performed above and beyond, they last longer
than any other pick on the market due to the expensive materials used, they are all made by hand by Patrick himself.
The newest shaped pick being the Attack III proving yet again that Patrick is continually looking
for a better material or shape to give today's demanding players that little extra edge,
i'm not endorsed by Hufschmid Guitars, but i do 100% put my name behind his Picks and Guitar workmanship,
you will not find better attention to detail.

So, if you think the price is steep?, it is, is it worth it?, Most definately, visit Patrick's site,
email him and ask which you should choose for your playing and if your local to me pop in and try them yourself!

Thank you for your time.