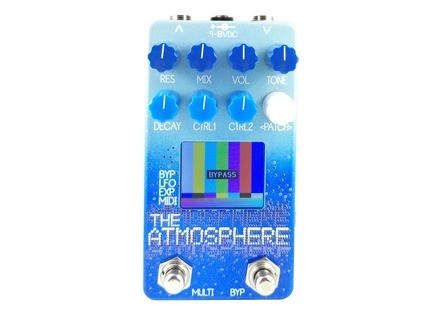 The Atmosphere, Reverb for Guitar from Dr. Scientist.

View all offers for Dr. Scientist The Atmosphere »

Dr. Scientist The Atmosphere
5
SOUND:
Sound-wise, there are two aspects to consider. First, the quality and clarity of sound of The Atmosphere is superb (24 Bit A/D converters at 33.2kHz sample rate); and second, the effects produced are amazing and unique.

If we consider something traditional and basic, the Plate reverb sounds like any other plate reverb in some respects (if kept subdued), but as you tweak the controls to affect pre-delay, bass, resolution, tone and decay, it no longer sounds like a plate reverb. It may have plate characteristics, but it morphs into something on a grand scale. Couple in the fact that you can ‘freeze’ the reverb into a drone (as you continue to play, or not) and you would be hard pressed to think of it as a simple plate reverb. The latter aspect is what makes The Atmosphere so usable, as you can have a hint of reverb to fill out your sound (even the crazy ones sound apropos when low in the mix), but can create enormous and flowering sweeps that go far beyond the typical canyon and space reverbs currently on the market. Some of the bizarre and utterly fascinating sound-scapes on The Atmosphere include Smear, Swell, Filter Mod FX, React, Aether and Alias (at least those stood out for me as being more unusual and original, but hats off to all the algorithms… not a stinker in the bunch). And to make these sounds even more dynamic is being able to include an Expression Pedal so that you can affect the reverb’s volume, mix, decay, etc., as well as the two elements controlled by the Ctrl knobs (e.g., controlling the low-pass and high-pass filters with the Filter algorithm). As stated, although The Atmosphere’s Multi footswitch can be assigned to do several things, you would be hard-pressed not to assign the ‘freeze’ function – nothing like a mesmerizing spaced-out drone to play a melody over.

OVERALL IMPRESSION:
The Atmosphere is not a budget pedal at $399 USD, but the tones, sounds, and flexibility (besides many of the original algorithms and MIDI capability) make The Atmosphere a must have. The best way to think of The Atmosphere is not as a traditional pedal, but a computerized multi-effects unit (this may be a ‘reverb’ unit, but there are modulations, delays and other effect elements involved). There are some basic industry standards here, including Spring, Hall, Room and Plate reverb, but even then there are some unique features that turn those basics into massive and spacey reverberations. And then you have some unique ‘atmospheres,’ including Alias, React, Swell and Smear. In total you have access to 16 fantastic algorithms, each being a Preset that you can edit and save (if so desired); as well, you can take an algorithm/preset and manipulate any of the elements on the fly to produce sweeping sounds, glitches and anything between. Two of the more entertaining functions include using the Multi footswitch as a Freeze button, so that you can create a drone that you can play over, and adding an Expression Pedal to produce unusual life into compositions. This is such a high-end effects unit (producing awesome sounds) that the only thing lacking is a stereo out. Nonetheless, the uniqueness of reverbs and soundscapes will make The Atmosphere a much desired addition for any ethereal artist.


GENERAL USE:
When turning on The Atmosphere, it picks up where you left off (when it was turned off last). There are 16 Presets that you scroll through, each being a different algorithm or ‘atmosphere’ (scrolling can be done via the Preset knob or the Multi footswitch). For instance, the first preset is Spring (spring reverb), and you can be in preset mode (as created by the factory) or you can tweak any of the elements (e.g., mix, decay, etc.), which takes you automatically in default/editing mode. And you see all this information live and on the LED screen (it takes mere minutes to learn how to use The Atmosphere effectively). You can save your changes as a new preset of that algorithm if desired (and there’s also a function to restore the pedal to factory default). With any of the reverbs you can adjust the resolution (slower, longer and grainer reverb vs. smooth and refined), the overall mix (wet/dry), the volume, tone (more bass vs. treble), decay (how long the reverb lasts) and then two other elements. Those other elements are set by the Ctrl knobs, and the two elements differ from one preset/algorithm to the next. For example, and with the Hall reverb, Ctrl 1 affects the amount of pre-delay, whereas Ctrl 2 affects the amount of bass. With the Smear reverb Ctrl 1 affects the diffusion, whereas Ctrl 2 affects delay time. Any of these can be manipulated to produce real-time changes and effects, done either by hand or via Expression Pedal (you can assign things like mix, decay, resolution, volume and the elements associated with the two Ctrl knobs). The Multi footswitch also can take on different roles, whether you assign it to select different presets, used as a ‘freeze’ switch, a tap tempo, etc. Two roles can be assigned to the Multi, whether you hold the footswitch or click it once.

OTHER DETAILS:
A standard sized pedal, The Atmosphere measures about 120 mm (L) x 65mm (W) x 65mm (H) with knobs (4.7 x 2.6 x 2.6 inches). The heavy-duty metal chassis has powder coated and textured blue that blends/shades from dark to light. You can feel the paint texture of the graphics, indicating a good paint thickness. The eight knobs (Res, Mix, Vol, Tone, Decay, Ctrl1, Ctrl2 and Patch) feel of heavy plastic and will withstand normal use and abuse (they are far removed from the two footswitches). All knobs have good quality pots (smooth and very solid when turned without any static or noise, although the Patch knob has a ‘click’ factor when turned and when choosing patches). The two soft footswitches (Multi and Bypass) are solid in feel with a good spring to them. The LED screen is near the footswitches, which is inconsequential since the switches sit well above the screen. The cable input/output and power supply are located in the back, keeping any small cable inserts away from a stomping foot. The MIDI output is located near the front end on the left side, which may eat up a bit of pedalboard space (no way of having it in the back due to the pedal’s size). The Atmosphere does not run on batteries and requires a 9VDC 300mA power supply, which is included.

See all 33 photos of Dr. Scientist The Atmosphere »

Other Dr. Scientist reverbs for Guitar