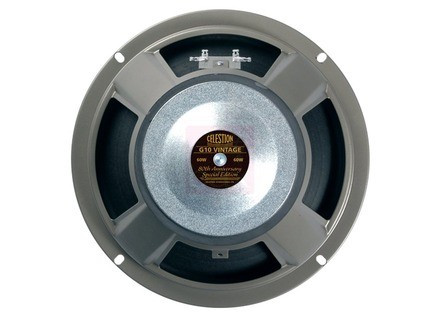 G10 Vintage, Guitar speaker from Celestion in the Classic series.

stefdu24's review (This content has been automatically translated from French)

Celestion G10 Vintage
5
Previous to the notice complter, I confirm ("a sound") I would say the G10 Vintage is more dynamic than the G10L35. when we replace it by a G10 in a vintage cabinet 1965, as I did, there is a lightweight and G10 dsquilibre vintage "passes" in front.
that's why I plan to replace all G10L35 by vintage ... a longer cohrent.

SUPEREBA's review (This content has been automatically translated from French)

Sound levels, it grows almost as much as my old Valvestate 40W. The HP has a good performance. no concern for group play.

I use a guitar with Burns, a TV I even tried with electroacoustic, a dobro and nylon. It's very versatile and clean.
I simply adjusts the tone controls based on guitars.

Celestion G10 Vintage
5
Used for 1 month, mounted on a Combo Blackstar HT-5, whose original Celestion sounded cold or sour. I wanted to play Led Zep, AC / DC, Aerosmith and Guns on this amp. It sticks very well, it wakes him clean sound that was cold.
We must be careful not to mount this type of HP on any amp. Blackstar The Boys are former Marshall's conception of this little tube amp suffers a bit. Attention, the highs are more present (but less shrill) than the previous HP, I had to touch my band equalizer and then the EQ of the amp. The bass is more rounded.
It's in the vein of the V30 used by Slash on the Marshall, so it suits me very well for what I want. Choice again without hesitation. Better than the Tech 21 SansAmp British (simulation of HP), which was too grotesque, and I stuck to my Blackstar ago to be closer to the sound of my favorite bands. I sold this pedal and invested in a real HP at once.