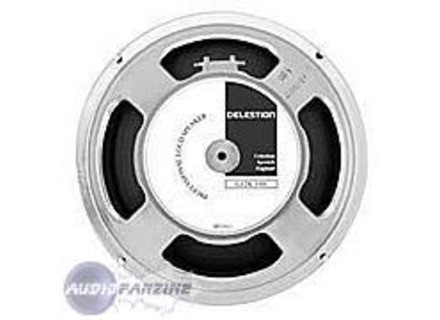 G12K-100, Guitar speaker from Celestion in the Classic series.

jeff13th's review (This content has been automatically translated from French)" Wow the best for metal!"

Have you tried many other models before buying it?
No. 4 model actually.

What is the particular feature you like best and least?
Definition, cleanliness, frequency balance! Perfect for the metal / modern rock.
Lacks a bit of character.

How would you rate the quality / price? With experience, you do again this choice? ...
the price / quality ratio is excellent especially since it is only in this category before.
I would do this choice without hesitation.

heavymetal84's review (This content has been automatically translated from French)" EXCELLENT!"

What is the particular feature you like best and least?
the + ben sound!
I make heavy thrash metal! and I finally SOUND I wanted for ages! good bass that shake the walls with good palm mutes, mediums as it should and acute great for solos!
with the HP, I get to have his own modern I've always dreamed of! coupled with my head Bugera 333 is a delight to my ears

Have you tried many other models before buying it?
before I had an old marshall 4x12 8412 .... ben my musical life changing!
otherwise my guitarist G12 but also very close TH100 model, but the advantage for me is that of K100 were quickly lapped in a few hours, and especially can play at low volume and the sound remains the same!

For me, I'd just perfect!

With experience, you do again this choice?
Altogether, many have advised me the V30, but I'm not a fan, with my guitar, we must be part of the few who do not like the V30 ..
If you want a nice big modern and clean sound on my side I would recommend the G12 K100

JereLuc79's review (This content has been automatically translated from French)

I would do without this choice HEdit.

Celestion G12K-100
4
Owner of a Mesa Boogie Rectifier cabinet with four Celestion Vintage 30 HP, I felt the need to change it after carefully compared to another cabinet Mesa Boogie Road King version with four semi-open HP Celestion Vintage 30 and two two C90 Black Shadow, a model derived from the Classic Lead 80.
It turned out that my cabinet if I passed easily through a mix, my sound was obviously filled with medium, rather harsh, and lacking in bass. The overall sound was very dynamic and well-defined, but I found more roundness on the Road King cabinet than mine. That's when I decided to change two of my HP.
I would not turn my four HP as Vintage 30 has undeniable qualities as to their presence and their dynamics, I had rather they try to find a pair of another model that would be complementary.
After some research, my choice was the Celestion G12K-100 to display characteristics: clarity and great response and definition in the bass detail that interests me because I play point given a half tone below the standard tuning.

After the change, I understand the difference and I found what was advertised: a clearer sound, more rounded and "wrapped" with bass present. However, I also notice that I am much less present in the mix so I had to edit my equalizer to not fall by the wayside when I am in band! I also think it has been wise to keep two Vintage 30 if the lack of attendance could ultimately disappoint me despite the other qualities of the G12K-100, because that is their main weakness: a lack of media presence and thus . However, coupled with Vintage 30 or more other HP media loaded, it has a more "full" and richer configuration with a uniform made of a single model of HP. Then the rest is a matter of equalization.

Conclusion: I am very satisfied with the change, I played a bass and clarity, and the loss of presence is compensated without regard to the equalizer as I said. I also states that the change is evident both in distortion that sounds clear with them that we gain roundness, which is very significant from my point of view.

I would add that I play mostly metal and I find this composition particularly useful for this style, but I can not be so positive for other guitar players practicing, it will be necessary to clearly define their needs precisely the advice Celestion G12K-100 for the Metal and the guitarists' down-tuned, "to wit. That said, nothing prevents using it for a different style, of course.

Did you find this review helpful?yesno
»
Read the 5 user reviews on the Celestion G12K-100 »