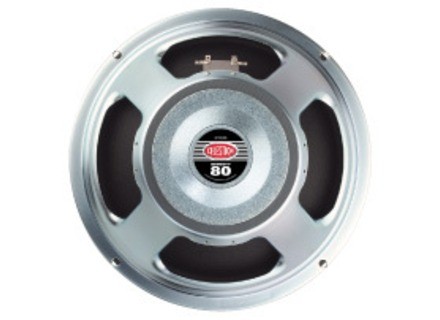 Seventy 80, Guitar speaker from Celestion in the Originals series.

View all offers for Celestion Seventy 80 »

Celestion Seventy 80
I have this Original HP in a combo 30 watts tube Laney.

This HP is atrocious!
Acute and are very showy little bass that was drooling a lot.
If you want a clear sound almost own it goes low volume in your room.
When you want to play again this is a ugly wish, especially if you start to put the distortion (and I do not even talk about hi gain type Metal Muff or other).

In short, as the previous opinion I do not see the point of this HP. I just ordered me a Celestion G12T 100 HOT I hope it will not be the same music ...

3 of 14 people found this review helpful

Celestion Seventy 80
1
I have 16ohms version taken in my Ampeg combo 50W (gvt50112).
It is rather effective hp (louder than my single cab kustom kg212 ...), and no lack of treble, they are pretty spicy!
Mediums are cold and synthetic, really ugly, and back in the overall picture (V actually).
The bass is well defined and flatulent everything they can as soon as you mount the volume (bad cat 15w, Ampeg, Roland BluesCUBE, bugera 1990) therefore be used eventually.

So what is the hp, I would see the limit on a line6 spider-peavey bandit or that sort of thing rather than a normal guitar amp, though a broadband is preferable to model ...
It sounds pretty cool actually, it's probably better than the original hp inexpensive amps, 80w and it leaves room.

There wanting to buy one, probably not seen the incredible offers currently available in cool prizes (100 roros), there is much more to do.

Well, I do not like Celestion agree but frankly this one is not terrible at all.

5 of 10 people found this review helpful

Celestion Seventy 80
4
One of the first hp that I owns and I always use, even though I now play on high-end cabs. I enjoy normment the behavior of this cabinet.

Capable of good performance and low-medium volume, it sounds particularly well transcribed and availing oneself of tension, in itself, a seed spitting and aggressive enough, especially in the treble that raid tr s beautiful Manir. All with a full-ct, which makes it a rare hp clestion.Il in the catalog is a bit stressful when the volume is sent to it overflows a certain limit (in a 2x12 30w lamps ), then type dsagrablement putting himself in the bass. In clean, it is true because rgal very clear and well dcoup not switch until you crunch in subtle, or it will tend to play the hair on the soup, because of this little acidity which sends dboule ds we gain.

Very cheap second hand, it may be, for those who wish to move towards a v30 for music more aggressive alternative intressant. The sound is fuller overall clarity and dominates the signal.

Beware of this rdage hp which is very long. You will need to be patient.

36 of 39 people found this review helpful