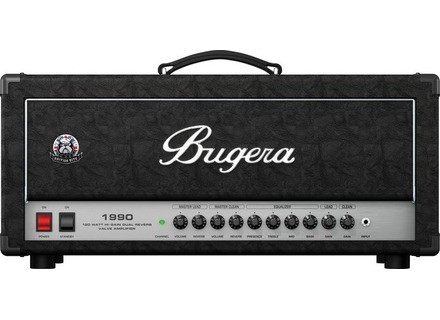 1990, Tube Guitar Amp Head from Bugera in the Modern series.

Bugera 1990
3
BUgera is an amplifier company and makes very inexpensive amplifiers for the budget musician. Many of the amplifiers come in well under $500 and most of them hover right around the range 350. This amplifier continues that trend with its low price and multiple features. This is it to channel amplifier with a clean any overdrive or lead channel. This is a very British sounding amplifier that features 45881 hour tubes and three ECC83 preamp tubes. You also get any reverb integrated within the circuit as well as an effects loop with a level control. You have to normal EQ section with a presence, bass, big, and travel control knobs. This is 120 W of high gain amp that be switched down to 60 W of operation with its half power cut switch.

The tone of this guitar is very British sounding tone. It rivals the sounds of Marshall or orange amplifiers. It gets a great distorted tone in the second channel which is the lead channel. The clean channel is a decent clean but it's nothing to write home about. It has also a gain control on the clean channel to even this channel can get into classic rock tones such as Led Zeppelin AC/DC type of times. So really you could have two distortion channels in this and if that's how you controlled your game settings.

This amplifiers that work well with any guitar that you have around. I suggest getting a speaker cabinet that has British speakers installed. This is the kind campus tennis match well with the British voice to speaker.

I highly recommend this amp to anyone who needs a cheap and inexpensive amp that is good at getting high gain distortion with a very versatile second clean overdrive channel. This has reverb too which is a plus as well. I have seen these in the used section for right around $250 which is a great price for a decent sounding and multichannel amp.
Did you find this review helpful?yesno
»

Bugera 1990
3
Bugera amplification is a inexpensive and cheap consumer friendly amplifier company. They have a vast range of amplifiers to meet every guitarist needs and wants. This amplifier is known as the 1990 Infinium which is an easy to use two channel amplifier with a clean and lead channels. This amplifier features three preamp tubes and four 5881 power tubes. You can find these amplifiers online fairly easily and they're relatively inexpensive.

I was actually surprised at how good this amplifier did sound. I've heard so much talk and trash about the Bugera amplifiers that I was already a little biased towards them. This is an amp that even surprise me at how well it performed at the price point that was listed at. This amplifier features a pentrode and triode power switch which means it cuts the rate of power from 120 watts down the 60 watts of power. This is great if you want to dial in a little less headroom and a little more spongy grittier attack in the high gain channel.

The tone of this amplifier can come off a little fizzy or buzzy but not that that's necessarily a bad thing but just a taste preference thing. It's not really a tone that I like that much but I could see how it could be likable to some guitarist. This is an easy amp to dial in and it can only take you just a few minutes to find that sweet spot for this amplifier.

At new you can find these amps listed for right around $400. That is a great deal for a multi channel high gain in queen amplifier. I highly recommend this amplifier if you need an inexpensive amplifier to me you're practicing needs or band situation.

Bugera 1990
5
Tested in store over an hour on marshall 1960 with various gibson and my tv hss.

First oddity, the lamps are 6L6GC 5881 despite the screen's frame. After researching the net and The Tube Amp Book Aspen Pittman's Tweedledum Tweedledee, a history of nomenclature. That said, some show a real difference output power level, bof. 120w is anyway much too loud, so ...

Second thing but it's fun, the gain will do you well it's a record up to 24! Spinal Tap can return to the locker room.

Adjustable effect loop but not controllable, separate reverb for each channel and controllable on the other hand.
No residual background noise, guitar volume to zero.

Easiest way is hard. The equalizer is common fact, more serious drive that is super clean.
In fact it does not change the masses, rather than an adaptation tonal modeling.
The loop I have not tested, but as she walks on the 333 to my hell a-priori favor ...

Whether clear from the outset, this amp has a grain absolutely delicious, a look that not even Mr. priced and therefore a circuit in the same spirit.
Before the test I listened to the video appearing on thetoneking jcm and 1990 (with good headphones AKG K240) and I found these sounds in real rarity.

The gain is very gradual, not overdone, and two-thirds (14!) Is just enough for a game versatile. The clean is also a gain, while staying clear and we can get more fat in the sound, useful.

If the 1990 sounds of hell with the gibson or the like is not as pretty on TV with HSS, the overall sound becomes much more acidic and less wide on the other hand intelligibility level (I think to break into the mix of the group) it's great.
That said, the tv is known for this.

With a 7 string linden / basswood is the amp is needed, the 120 watt become useful.

The triode mode provides more compression and mediums, and still have enough watts. It is a very interesting option, and one could almost miss it either on the back of the amp.

This is probably my next amp, I had very good experiences with the 333 and the reliability issue v5 / sound / noise so I do not worry.

Value for money unbeatable agree, but in fact I do not care is the sound that interests me. And that of 1990 I like a lot, a hell of a pace even a low volume.
Did you find this review helpful?yesno
»

Ravage Alliance Club's review (This content has been automatically translated from French)" The receiver of the people ... :-)"

Bugera 1990
5
see other reviews
To quibble, I would say it lacks an LED on the footswitch

The Tolex is awful (plaster inside).
The unit is extremely well finished, however, to frame within very pretty.

Rather Mastoc (22kgs), it has large rubber feet complete isolation of vibration of the cab.

Super simple config. The equalizer is not hyper-reactive, like a Marshall.
The range of sounds delivered by the amp is not very wide: we love the original sound or not

it simplifies the task: one branch, is regulated in 30 seconds and you play (and it sounds!).

The control buttons are soft plastic (?), Not super comfortable to manipulate ... M'enfin who cares!

Like many amps (has almost all actually), we must avoid putting the reverb + 3.

The amp does not emit breath, even lead. Impressive (my TSL is never forgotten this side!)!

Both say now, the clean is amazing!

With my PRS McCarty splitted into microphones, I'm competing with Fender, no worries.
Same with the Start. I simply placed a small delay in the loop (memory toy), and total happiness is

Compared to the Vox sound more American.
I do not mean compared with my JCM 2000 (though not icky at that level), it's a different world.
Really, try this clean, you'll be surprised!

The sound is round, the enormous dynamics, although these low, even at low volume.
Incredible ...
I was thinking to buy a Fender Band Master for my ability to complete clean sounds, this is going to change my plans!

We pass the Lead channel:

We will talk more distortion than crunch, as the sticker "Hi Gain" on the front is not there to decorate: the crunch amp up to 6 (position max = 22), then we enter the world the distortion.

Perhaps it is this that saddens me a bit: the range of crunches is not extensive.
We gained a lot by pushing the gain from clean, but it must then make a choice between clean and crunch: - /
I found the solution using a crunch a bit more muscular than usual, which suits me for rock / hard rock of the 90 (AC / DC, Gun's, Kravitz ...).

Question distortion, it sent the block. There is a little less bass than on the clean channel, which may pose some problems for the death metal etc. ... Metallica by a cons, it goes without worries (and even more!).

The dynamic is always excellent

I tested a dozen pedals overdrive it, and it takes all without flinching (unlike my vox: - /)

The quality / price / performance is unbeatable.

I bought this head for leaving it in my rehearsal room. The goal was to have a drinking its not too expensive to avoid walk off my JCM 2000 2x a week.

Mission accomplished: I not only spent less than 300 € for the second config, but also the sound is great.

I shall publish this notice in case of breakdowns, but meanwhile he is in any way guarantee 2 years.
And for 300 € ...

Did you find this review helpful?yesno
»
Read the 6 user reviews on the Bugera 1990 »