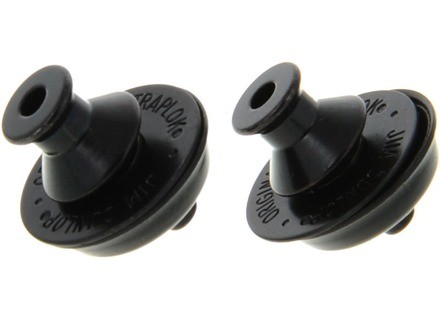 Dunlop SLS103 Straplok Dual Design Strap Retainer System
5
I really have to say that if you play standing up with a strap at all, these things are a MUST have for you. I started playing guitar about 3 years ago, and as soon as I got my first strap I bought a pair of these. I had started on acoustic, and decided I wanted to buy an electric, so I saved up to get a Warbeast NJ Deluxe, which is around $800. I knew that I didn't want it hitting the floor from the strap coming off, so I decided I wanted a pair of straplocks. I mainly looked at two different brands, Dunlop and Schaller.

The thing that I liked the most about Schaller is that there was just about no way in heck that your strap was coming of without you meaning it to. The lock went around the strap button, and to release it you had to pull on a part that stuck out. What I didn't like is that since the strap buttons on the Warbeast are on the back of the guitar pointing in towards you, the part that you pulled to release the lock on the Schaller's would be poking me.

The Dunlop's on the otherhand, locked by sticking a shaft into the strap button that then had ball-bearings that were forced out when you let off of the release button that locked it into place. I was afraid that since you pushed a button to release the lock that it might accidentally release when I didn't want it to, even though the button was recessed. Even so, I went with the Dunlop's, because they wouldn't poke me.

Having owned them over two years now, I can say that not once have they released when I didn't want them to. They have held up very well, and I'm sure I won't have any problems with them down the road. Would I suggest these over the Schallers if you had a guitar that the strap buttons faced out to the side (Like a Strat or Les Paul)? I'm not sure. I haven't had any hands-on extensive experience with the Schallers, but I know for sure that the Dunlop Dual Design StrapLoks have worked for me 100% of the time. I can't recommend them enough, really, go out and buy a pair, you'll be glad you did. They do take a little bit of installation (You have to replace the strap buttons that are currently on your guitar) but it's easy and well worth the time and money you'll spend.
View price information
Did you find this review helpful?yesno
Cookies help us improve performance, enhance user experience and deliver our services. By using our services, you agree to our use of cookies. Find out more.