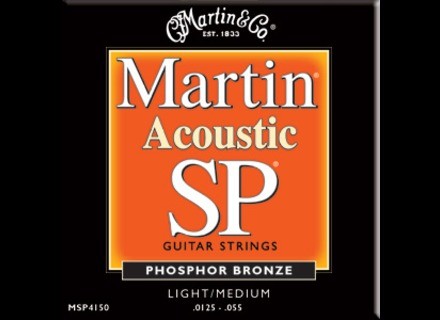 Martin & Co SP 92/8 Phosphor Bronze
3
I have been using the Martin SP Lights on my guitar since I purchased it in 2002. I have a mid-level Martin Guitar, the DM. I am not a professional, expert guitarist. However, I have been playing for ~15 years. I do a lot of recording, and I try to be as intentional and detailed about the tone of my guitar as possible. I change the strings on my guitar once a month. I probably play the guitar 3-5 hours per week. For the longest time I was loyal to the SP lights. I could definitely tell a difference when I put a new set of strings on after a month. They always sounded cleaner and had longer resonance/sustain. I think this is mostly due to the build up of dirt and grime that can occur on guitar strings. More often than not, I clean the strings by wiping them down after I play. Nonetheless, I would change them whenever I was going to do a new recording.
Recently I tried out Elixir strings. After playing Martin SP's for so many years I was loyal to the SP's and have always thought that spending the extra money on strings wasn't worth it as long as I kept fresh strings on the guitar. I really like the sound of the Elixirs, and I thought they added a little something extra than my regular fresh set of SP's. I went to a local music store to pick up another set of Elixirs, but they only had Martin SP's in stock. I purchased the SP's and put them on the guitar. Honestly, I was a little disappointed with the SP's. I thought that the fresh set didn't sound as detailed and bright as the Elixirs. The tone on the SPs was definitely darker (which some people will probably like, if that is your style of music). But for me, I think in the future I am actually going to switch to the Elixirs.
Did you find this review helpful?yesno
»

Martin & Co SP 92/8 Phosphor Bronze
The Martin & Co Acoustic SP Bronze Light acoustic guitar strings are probably my favorite set of guitar strings. Let me start out by saying that I have a few Martin acoustic guitars that I use frequently and I believe in using the same brand of strings on guitars as I find they sound best, especially when it comes to Martin. These strings fit all of the Martins that I use very well and I like the light set of strings best as I find that they are easiest to play for me. These strings in particular really have a great sound to my ear, and while a big part of it is the guitar itself, these strings are extremely vibrant when compared to some other sets of strings that I’ve used with the same guitars. After trying out some other types of guitar strings and not being happy with the sound I decided that when it came to Martin guitars that I would always use Martin strings. The Martin & Co SP series of acoustic strings have since been my strings of choice when it comes to acoustic guitar strings and I don’t see myself turning back at any point too soon. While I will use other strings on some other types of acoustic guitars, I do find that these strings sound great no matter what type of guitar I use them with, whether it be Martin or not. The Martin & Co Acoustic SP Bronze Light strings are just as cheap as most of them out there and I find that I am always getting a pretty good deal when I get them. If you are using a Martin acoustic guitar, I would highly recommend picking up a set of the Martin & Co Acoustic SP Bronze Light strings.
Did you find this review helpful?yesno
»

Hotfirecaster's review (This content has been automatically translated from French)

Martin & Co SP 92/8 Phosphor Bronze
3
Super strings only drawback is that you change them very often because they do not shine very long time ...
Did you find this review helpful?yesno
»

dandybsx's review (This content has been automatically translated from French)" Good product for beginners."

* What thing do you like most/least about it?
I am a beginner so I step back on the stuff. However, the sound is very pleasant from the first use. It does not sound too metallic (harpsichord effect) that is found on the reference bronze martin.
The bass are not very present, ideal for pop / rock in my humble opinion.

* Did you try many other models before getting this one?
I tested it with D'Addario phosphor-bronze bass presence is more important to me.
I tested the ropes to avoid martin bronze metallic sound too.

* What is your opinion about the value for the price?
Good value for money. A set of strings that keeps its promises.

* Knowing what you know now, would you make the same choice?
For a beginner like me this game is really interesting for its proposed holding ropes for practice one hour daily average is limited (the strings oxidize fairly quickly).