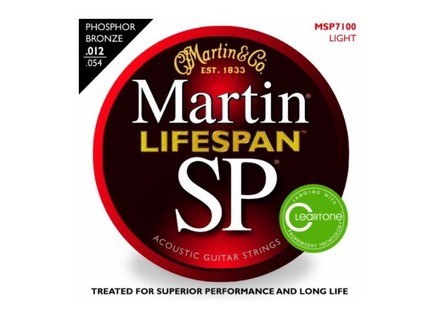 Martin & Co SP Lifespan 92/8 Phosphor Bronze
4
The Martin SP Lifespan strings are the more expensive version of their regular SP strings. The SP+ strings are claimed to last longer and hold their tone longer than the cheaper strings. The strings are made of a blend of phosphor bronze and come with Martin's Cleartone treatment that is supposed to make the strings last longer. My experience is that the extra cost of the strings does improve performance, although each guitar player will have to decide for themselves whether the extra cost is worth the improved performance.
I have used both the SP and SP+ strings on my Martin DM (a mid-level guitar). I did not notice a major difference in the tone between the two different types of strings when they are initially put on the guitar. I never play hard enough to break strings, so it is hard for me to compare if the SP Lifespan strings are more 'durable' over a long time than the regular SP strings. In my recollection, the SP+ strings may have held their tone longer than the SP strings. I typically think that the SP strings start sounding dull after about 4-5 hours of playing. I would say that the SP+ strings probably held their tone for about twice the length of time.
My main suggestion for anyone that wants their strings to last longer is to clean them after you play. The biggest thing that sucks the tone out of a set of strings is having the dirt and grime build up on the strings. When this happens the strings can vibrate appropriately. Finger oil will eventually build up on any type of string, regardless if it is SP or SP+. Buying 'coated' strings can help this problem. But if you are willing to spend the extra money to buy expensive strings rather than the cheap strings, you should also spend the extra time to clean your strings.

Martin & Co SP Lifespan 92/8 Phosphor Bronze
Purchased and installed last week. Before I was faithful to Martin Bronze Traditional, I think I'll come back ...
I do not like touch, too smooth to my taste, against the sound is very bright, even too much for the bottleneck (it drool). I also find that they lack bass, luckily my guitar is provided on that side.
I hesitate between two global opinion: either these strings are great but are just not suited to my guitar, or they are really not too terrible as medium. So no note.

Published on 07/13/11
C.F. Martin & Co.has announced that it is expanding its successful Martin SP Lifespan line of acoustic strings.

Martin to Use SP Lifespan Strings on Production Guitars