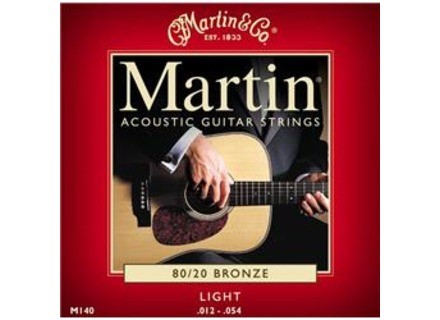 Martin & Co Traditional 80/20 Bronze
5
The Martin & Co 80/20 Bronze Acoustic Strings are a pretty standard set of guitar strings for of course, your acoustic guitar. I've gone through a few packs of these strings for my Martin DX1-R, although they aren't currently on them now. The strings come in a few different gauges, ranging from .10 - .13, but I usually use the light .12's. This is really just a matter of personal preference when it comes to both sound and feel, although the difference between light and extra light isn't going to be drastic. I'm not incredibly picky when it comes to my strings, but to me these are as good as any for my Martin. I don't always get strings of the same brand for guitars, as Martin strings are great in general and can be used on any brand of acoustic guitar. Martin is one of the finest makers of acoustic guitars in the world, so naturally they make pretty high quality strings as well. They do make strings of all shapes and sizes, so I'd encourage those looking for the perfect set of strings for themselves to give a bunch of strings a try to see what works for me. Definitely keep the Martin & Co 80/20 Bronze Acoustic Strings on the list to check out, as these are tried and true strings that may not have anything fancy about them, but they get the job done and will last you a pretty long time. It all depends on how much you play, but even if you play often you shouldn't have to change your strings more than every two months with these, unless of course you're playing and recording every day. No matter what you're use is going to be for the Martin & Co 80/20 Bronze Acoustic Strings, they're definitely a set worth trying out if you're looking for new acoustic strings.
Did you find this review helpful?yesno
»

Martin & Co Traditional 80/20 Bronze
4
These are a set of Martin and Co. acoustic guitar strings. While Martin are definitely known as one of the premier acoustic guitar manufacturers worldwide, they also do make great strings. These strings are especially great because they sound good on just about any acoustic guitar anyway (not just Martin!) I personally use them on my Taylor and they sound great. This particular set is a custom light set, which has a lighter gauge but is less consistent than the regular light set that Martin makes. The gauges on this set are .11-.52 so you have some heavier gauges on top but are really light on the bottom.
I personally like this set for switching between leads and rhythm with acoustic guitars. However, I don't do that a lot so I find that they aren't the best for anything really. It's easier to really let loose on some higher pitched runs but to strum the whole thing is slightly awkward at first. I can get used to it but it still feels a little strange, though not as strange as playing a completely light set.
I personally think that there are people who would really dig this set of strings, however I personally need something a bit heavier so that's a downside. For beginners though, who have trouble with everything being too light but still need some slack, this might be a good choice. Tone-wise they are great except that they aren't hard enough to really whack, so beginner's would most likely sound great with them but probably break a lot of strings.
Overall though the price of these strings is reasonable, and they are really nice, so assuming that the gauge works for you I'd go ahead. If not however there are custom gauges that are higher too, so definitely be sure to check out the customs as they might actually suit you better, assuming you haven't just gotten so used to the normal sets. Definitely a good purchase all around assuming you don't strum too hard.
Did you find this review helpful?yesno
»

Martin & Co Traditional 80/20 Bronze
I recently picked up a ten pack of Martin &amp; Co 13/56 Medium Bronze acoustic guitar strings after I saw them on sale and I have to say that I'm really happy with the purchase.  I usually get light bronze Martin strings because I have smaller fingers and they are easier to play for acoustic, but since these were on sale I decided to try them out.  While they are a little tougher to play at first because of the bigger gauge, after playing them for a few days I've definitely gotten used to them and they are now quite easy to play as well.  The best part about the Martin &amp; Co 13/56 Medium Bronze acoustic guitar strings is that they have an immaculate sound to them that is extremely full and rich sounding.  I got a similar sound with the ligher strings made by Martin, but I guess the extra size gauge gives them a little extra to their sound.  I have played two different acoustic guitars stringed up with these - a Martin DX-1R and a Taylor 814-CE and both sound really great with these strings on them, which is not to say that they probably wouldn't sound great with any strings, but it is noteworthy that both guitars of two different brands with the same strings both sound great.  Since I got these on sale, the price was truly a bargain, coming out to about $3 USD a piece in the pack of ten!  Even though this was a sale, if you buy a ten pack anyday you can still get a pretty good deal and even if you buy a single pack the price isn't too expensive.  While I still prefer lighter strings, the Martin &amp; Co 13/56 Medium Bronze acoustic guitar strings do a great job and I would highly recommend them to any aocustic guitar player.

Martin & Co Traditional 80/20 Bronze
2
Purchased at the time to fit yet another guitar "emergency", I installed a game on one of my Ovation and the least I can say is that this is really not terrible. The lack of consistency, completeness, balance of short musicality. This gives a narrow sound that can not meet a quality guitar. However, I understand that on an acoustic at 100 €, the Martin can make all the illusion that they have the advantage of a very low price. But for two or three dollars more, there is so much better than it ultimately absolutely not worth it at all.
Forget it.

Did you find this review helpful?yesno
»
Read the 11 user reviews on the Martin & Co Traditional 80/20 Bronze »