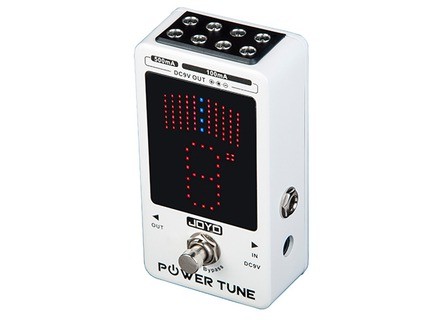 Joyo JF-18R Power Tune
5
I bought it on eBay, straight from China or Hong-Kong – I can’t remember. I got it for a very decent price, and everything would have been perfect had the seller not forgotten to send me – as promised – a box containing a European power supply instead of the US version. In the end, after a few mails and a partial refund, I’m very happy with this purchase.

I’ve installed the stompbox very early in my fx chain on a pedalboard that I use for rehearsal and live, which is most often composed of my Relay G30 wireless receiver =&gt; a buffer/booster =&gt; this tuner/supply =&gt; 2 or 3 drive stompboxes =&gt; a buffer/booster =&gt; a hard-bypassed small EQ. All these are true-bypass, except for the two buffers/boosters.
I mentioned that I’m using this setup both for rehearsal and live because the electrical supply is often an issue – what I mean is that in many places the electrics is rather poorly done, sometimes inducing hum because of phase and/or ground issues. That was my problem with my previous setup which involved a mini Polytune 2 tuner and a supply based on a Visual Sound 1-Spot with an 8-out daisy chain from the same brand – not a real hum actually, yet a little something that could be heard on distorted sounds. And I only ever play using distorted sounds.

So, i’ve replaced the mini Polytune 2 with the Joyo and taken the daisy chain away to supply each pedal (including the G30 receiver) through one of the Joyo’s power supply outputs – with the Joyo’s power provided by the 1-Spot. Great result with no hum – not in the place where my band rehearses at least as I haven’t used it live yet, but this seems to announce great things. The sound is not the cleanest you’ll get either, but this is inherent to all high gain circuits such as ODs, not to the supply.
Yet, the wiring of my pedalboard looks a bit more messy now than when I used the daisy chain, but the efficiency of the isolated outputs – one per pedal – is here!

As to its role as a tuner, it is less accurate than the Polytune 2’s strobe mode (which is the more efficient, +/-0.1 cent )... which by the way I never used as it was, precisely, too accurate for me!

Using it, I never managed to get 100% in tune and being a little maniac I couldn’t resort to play like that so I preferred the classic, +/-0.5 cent mode, which was largely good enough to my ears and allowed me to get in tune quicker. Whether in rehearsal or on stage, you have to be quick!

For this use, the Joyo is as accurate as the mini Polytune 2.
The display is easy to read, at least when you play indoor – I don’t know what it would look like outdoor in a sunny place but IMO the LEDs seem powerful enough to be seen in such a situation.

I couldn’t tell if it works well with alternative tunings or not as I don’t use any of these.

In the end, this pedal is perfect as to the basic use of the tuner part which i make of it, and i’m very pleased with the advantages brought by the isolated supply outs to supply my other pedals, especially considering my pedalboard is too small to put a supply brick such as a Fuel Tank or DC Brick...