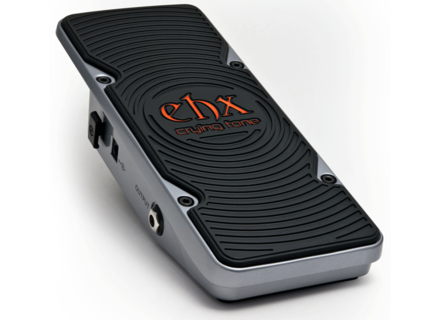 Crying Tone, Wah-Wah/Auto Wah/Filter for Guitar from Electro-Harmonix in the Next Step series.

All user reviews for the Electro-Harmonix Crying Tone

Average Score:4.0( 4/5 based on 4 reviews )
Not satisfied with those reviews?
Our members also liked:

BelleEpoch's review (This content has been automatically translated from French)" Engaging"

Basic Connections: input, output, and a small switch for the calibration of the machine (which takes 3 seconds to break everything).

The setup is simple: the pedal is calibrated by pressing the switch, then the tilting over its entire run, and then a second time you press the switch.

The effect by rocking the snaps forwardly wah (classical, therefore).

In use, several faults can quickly irritate regulars wah: the foot has a tendency to walk on the floor when it is used because of its low weight, it is not directly integrated on a pedalboard, the control activation is placed under the foot (shame because it is class, and it is useful to know whether the effect is on the way when you need it ...), you can not lock halfway to play "money for nothing" (this is an example, I do not care a little play "money for nothing" and anyway I have not so good level ...) and no resistance when the race is confusing.

Yes but now, despite a few flaws, I am very attached! This is my first wah, so I'm not put off by the novelty (unlike my acolytes scene accustomed to cry baby), and I was attracted by its principle as soon as I heard.

To return to the issue of pedalboard, EHX released something supposed to solve the problem: the "cradle". If you only want to keep the pedal fixed on the go, why not, but if you want to leave the pedal on and play with, you can forget and save 15 € at the same time. Hickey (a simple piece of plastic) is poorly designed, and as the pedal tends to wander, it abuts against the edges or at the start of the effect, or during the use of the pedal .. . the best is anyway to put the volume crying on the floor next to the rest.

Also note: because of its design, the pedal can be used playing sitting, which may in some sort.

The digital side of the pedal could let his fear cold and without personality, but it is not so! If the sound is a bit more right than the classics, there is super nice and makes a very expressive playing. The pedal does the job both on stage by sending music nag on a Dark Terror, seated in the living room playing sitting like a grandpa with AC4!

If you use it with a high gain amp a little pushed, the effect tends to amplify a little breath, but in battle it does not really stand out ...

Again, the particular design of the pedal can also use a little more experimental, with some effects to walk out unusual plans, which seem difficult to obtain with a conventional wah.

You can also find on the net other ways to calibrate the pedal to get a little more special effects, but it's still an accessory.

I use since December 2012, and as I said this is my first wah. Previously I was pretty adept "I live plugs into the amp and roll my chicken."

I really like the sound it makes, its robustness and ease of use, and that it should (presumably) help prevent the usual wear problems.

The value for money seems more than adequate. This is a pedal that I recommend to both beginners and regulars (provided they are not ultra fanatics old school).

If I had the choice again, it would be no problem. If we had to re-offer me, I will keep to lug around!

It really is a pedal that I love, and I think that deserves the tests at some length, because its qualities far outweigh its flaws.

nicosonic's review (This content has been automatically translated from French)" big problem of stability ..."

Simple to use, the calibration of the pedal takes 5 seconds. change the battery is easy as

in the 90s I had a vox wah which is made crachouiller after a year ... I am tempted by this crying tone, unfortunately it creates more For troubleshooting it solves ...
The pros:
Good sound-wah
-Movements of feet that are easily seen theres no "resistance" physical.
-Easy to engage and virtually impossible to "trigger" by mistake.
large -:
It does not pedal up! with movement up and down, it moves to the right or left and forward without stopping! if you play 5 minutes, it will be moved 10cm forward.
-The "guide" to put a power supply does not even put too thick wire must unscrew the screw over to the thread ...
so I decided to buy myself a pedalboard EHX cradle to give a chance to this pedal ... and there is the drama ... with movement up and down the pedal, it goes over the edge of the "cradle" making the pedal almost unusable (the support blocks complete movement of the wah, you no longer have access to the treble region wah) and it'll just pull it back with your hand (with the foot that is not even possible).
I understand the approach EHX (eliminate spitting and wear wah trad) but it's just not possible, even if the pedal did not move, but unfortunately these pedals next-step create more For troubleshooting it n ' solve. when the "cradle pedalboard" is foutage pure and simple mouth, do not waste your money on it. I returned everything.

Electro-Harmonix Crying Tone
5
solid pedal (see video on the website of the brand) original design 2 input jack in and out, 9v power supply input, a mini switch to calibrate the effect wha and then that's it! Sympa logo that EHX s lighter when the effect and operation

at the first start, you should calibrate the stroke of the effect moyendu mini switch (see manual) by making this small and very easy handling operation is identical to a standard whawha without noise switch potentiometer and another begins to crack with age

the sound is simply excellent!, dynamics, expressiveness, silent mechanism everything I like in a wha and present in this pédale.cette HEX crying tone I was really amazed

For info I have a custom audio Dunlop MC404 (a must in its category), A Vox V847 U.S. (buy a colleague a long time ago) I had many other wha (MORLEY, CRYBABY. Colorsound etc). But this pedal all the qualities to enter the HEX légende.Bravo

Very easy to use, in 5 min, it is as if we had always used this pedal ...
For me it adds to a floorboard therefore acoustic guitar ...
The cry baby, the vox are too noisy for acoustic ... morley too soft for my taste ... and the knob on off side I do not agree ...
BUT ESPECIALLY FOR ME IS THE NEW POWER PLAY AND PUT SIT!
I do not know if you already try to snap a crybaby sitting ... good luck!

The sound is excellent up to the reputation of pe ...
So no it is not the sound of CRY or VOX ... but personally I needed a sound rounder and more proportional in its course ...

A whawha ... remains a whawha, but undeniably, EH offers something new!
It remains negative points:
- Fixed integration step in a floorboard
- No possibility to block the pedal half way
But personally I have three other wah (Cry, Vox, Morley), and these problems do not bother me, since I do not want to integrate it into a floorboard, or to use it to filter half way ...
The act of playing to see sitting in cafes concert, hear no sound stray from the ground ... and quality of wha to remain a sound its best assets!