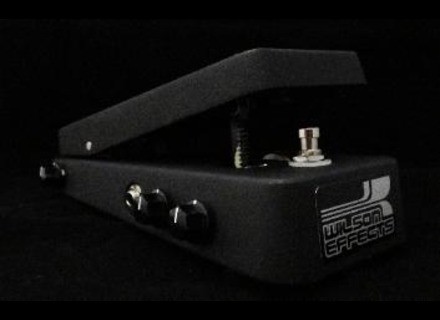 props's review (This content has been automatically translated from French)" Excellent"

Wilson Effects Rippah Q-Wah
5
This is a wah pedal boutique made by Kevin Wilson and his small team. Different models are available, all produced in different versions. Mine is a vintage spec'ed Rippah position 6 Q-Wah: 6 voicing settings + setting and low setting sweep, and mounted with components "retro" (carbon resistors, style condos Tropical Fish, etc ...) . Can be fed by 9V battery or power supply. In this version also included an output buffer for compatibility with fuzz circuits, and a blue LED activation. Finally, there is a trimmer output volume in the case.
The assembly is mounted with care and precision, the case exudes strength.

The use? This is a wah pedal, the foot is placed, it supports and waaaah

More seriously, we have to look a little more about the available settings and we discover an extensive options panel. The first knob, starting from the heel, controls the lower. At zero, the sound down very low and generates a huge growl. The second notched knob sets the voicing when the pedal is at an end. Position 1 corresponds to the most acute voicing.
Finally, the third knob sets the intensity of the sweep, ie the resonance peak. At zero, no wah! At bottom, it screams!

Mr Wilson had the excellent idea to provide the manual a list of presets recreating the main types of wah (Clyde McCoy, Colorsound, etc ...). Well seen.

The sound quality is simply awesome. It was under the foot and into the ears of good feelings. It is perfectly tailor the sound to his game and his equipment. The response of the wah before a fuzz germanium is excellent.
Only minor drawbacks noted:
- On a popping sound, noise is heard. This is "normal" on Vintage Specs models dixit Mr Wilson. It is not unbearable. Although the inductor is shielded Care must be taken to remove the pedal electromagnetic sources (power supplies in particular) as possible.
- Potentiometer wah tends to sputter. I have to often spray spray for electrical contacts. May be a fault of my model, to see to change if it persists.
- The outbreak of the wah is not always easy: you have to slightly lift the pedal to operate the power switch, which can lead to delays "in the heat of action." Probably a lack of power spring. This is not fatal, you just get into the habit.

Wilson Effects makes its merry way reputation issue, and it is quite justified. Contact Kevin Wilson is quick and friendly. The value for money is quite interesting. Products are not currently imported into Europe, but you can order directly from the U.S. site. The rest of its production also probably deserves some attention a little. A strongly advise!