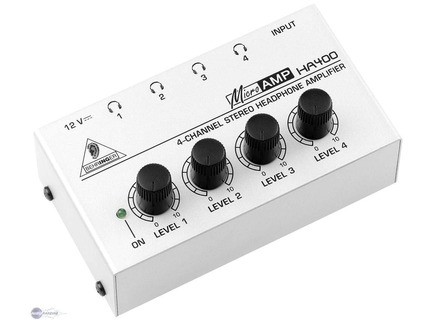 Stereo headphone amplifier. You can let up to 4 different people in your studio listen to the main mix while the recording is being made, and each listener can determine his own volume level using the dedicated output level controls.

Behringer MICROAMP HA400
4
I won't kid anyone here. You're not a high-end studio owner. You aren't looking to spend oodles of cash. You're here because you want a headphone amp and don't have that much to spend. It's not very frilly, but the Behringer MicroAMP HA400 headphone amplifier does everything it says it does. Well.

Sound: It's a headphone amplifier for someone who needs for outputs. It doesn't have unbelievable technology packed inside, but the truth is, it gets loud, and there are four of them. That's really it. There's nothing terribly crippling about it, despite its price and the miasmic stigma that shrouds the name Behringer. There really isn't any more noticeable noise from using it instead of listening directly through my TASCAM US-1641. They're connected with a short Hosa cable and I use Sony MDR-7506's primarily. It's pristine. Due to the market of this product, it doesn't feel irrelevant to say it's also wonderful for desktop speakers and movies and casual music listening, should you be the type.

Quality: SOLID. It's not the heaviest thing in the world, but that's because it's small. I was pleasantly surprised when I noticed the heft of the box. It does have quite the sturdy chassis. That being said, the knobs make me question the quality control. Knobs 1,2, and 4 have a very nice balance of resistance to them, but knob 3 is tough. It's absolutely workable without a lot of effort, but compared to the rest, it's easy to be reminded that Behringer's quality control as of the writing of this review is not exactly what one would call top-notch.

Features: It's a no-frills headphone amp without any sort of adjustments besides volume. It works well enough for monitoring. The one thing that I understand due to the low cost but nonetheless bugs me is the lack of a power switch. You have to pull the darn cord in and out everytime. I know, I know. The lower cost units from my experience are the ones that lack power switches. Unfortunately, this seems to be practically illogical, since the members of this amp's market are less likely to own power conditioners with kill switches for their audio equipment. I have to deal with the same thing for my FMR RNC. Annoying, isn't it? Not a deal breaker though; anyone who spends $30 on a headphone amp can't beg for everything.

Overall: It's a wonderful little machine with its quirks that probably vary from box to box. Maybe all your knobs will turn right, maybe they won't. Either way, This machine does exactly what it's advertised for. And truth be told, having a headphone amp not even for multiple monitoring purposes, but for consolidating your headphone and computer speakers (because I know you low-end people have them), this little box is a very liberating tool. 8/10. Just for the dubious quality control in regards to the knobs, and maybe .1 for my low-end pet peeve, the lack of a power switch. Great product. I still fully recommend it if you don't already have a headphone amp.
Did you find this review helpful?yesno
»

Taotopia's review (This content has been automatically translated from French)" Small, perfect, without major surprises ..."

What I like the most, the small size makes small services.

I bought this product because we needed to multiply headphone outputs, so purchase made speed for the price .. After not expect the large equipment, it helps out.

Kal's review (This content has been automatically translated from French)" practice"

I have for many years, it still works fine.

I use it for headphone returns when taking his home studio, so I have my headphones (connected to this little preamp or directly to the headphone output of my sound card - Roland Octa Capture) and so I can have up to 4 zicos connected to it.

I did not test its qualities of restitution but it is not what I intended: it merely serves me to give back to the musicians I record, and in this use it has always done his job, and the sound is very respectable, in short a small preamp cheap, if you want a good stereo headphone amp, look elsewhere, this is not his vocation.

Behringer MICROAMP HA400
3
I've had two years in a home studio.
To a question of price, like everyone, I turned to the HA400.
My first impressions acoustic session were as follows: He does his job well, hey you can not push too much volume but it's enough.
For the second, a sound recording for a rock band: Can not grow well without volume overload the HA400. I plug my headphones directly into the stereo output: perfect, I put it in the HA400 knob in the middle, there was a sound two times lower and if I get the volume of HA400, the amplifier saturates. In the end, the sound was difficult and the musicians are not heard ...
Back home with my DT770 I compare with and without and indeed, the volume is limited, its colorful and ultimately a poor quality.
Since I have used over and I went on a samson sphone more neutral though still colorful and generous volume for our group, we made the headphone and to create a sound balance is still better to have his faithful minimum.
After this little HA400, it is not bad. He does his job unpretentious and good value for money. Especially for starters, its low price will enable you to invest more in other elements (including headphones). In terms of sound, it is in the amateur and non-pro studio but for example a musician back unamplified, it is enough.

Did you find this review helpful?yesno
»
Read the 19 user reviews on the Behringer MICROAMP HA400 »