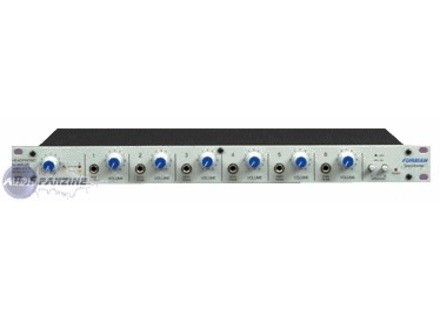 Furman HA-6A
4
The Furman HA-6A is a six channel headphone/monitor distribution amplifier. I've used this in a band's home studio where it's set up for sending Pro Tools to headphones for monitoring during recording. In the back there are both 1/4" and XLR inputs for both the left and right channels as well as speaker cable outputs for sending it to your monitors. It also has an extra XLR for sending your signal to a separate speaker, like a subwoofer I'd imagine. The front panel has controls for the six channels, each of which has a 1/4" input for plugging in headphones and a volume knob to correspond to each one. The front also has an overall input level knob and buttons for turning on the A and B monitors independently. It also has a built in power cord so it just plugs right in without the need for a separate IEC cable. There's nothing flashy or really even too noteworthy about the Furman HA-6A as it's a pretty basic headphone distributor. It's probably best suited in a home studio as in a professional studio you're going to want something with a bit more control in terms of sending mixes to them and users having their own control, like the Private Q systems. If you just need to send the output of your DAW to a few different headphones, this will do the job just fine. In fact, it's a good option since it's now discontinued and can be had for a very reasonable price. Again, if you're looking for a headphone system for your professional studio, I'd go with something more in depth from Furman like the HDS-16. However, the HA-6A will suffice for home studios and smaller ones in general, so definitely check it out if this would apply to you.
Did you find this review helpful?yesno
»