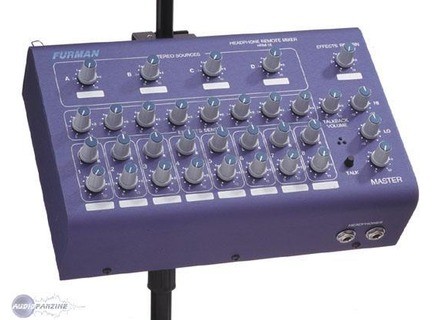 Furman HRM-16
5
The Furman HRM-16 is a headphone amplifier and sub-mixing designed for use during recording for those performing to hear what they are doing and what they are playing to. It gives users a portable station so they can control their own mixes on the fly. The box is for use with the Furman HDS-16, and possibly others but I'm not sure as I've only used it with the HDS-16. The headphone box comes with a mic stand adapter, so it can sit on a mic stand easily. As far as the make up of the box goes and what controls you have, it has eight mono channels or four stereo channels and also has eight stereo effects sends. In addition it has a talk back volume knob, high and low equalization, an effects return and a master volume knob. The box has two 1/4" outputs for plugging headphones into the box and has a thick cable that attaches to the HDS-16. So while the Furman HRM-16 does have a good amount of versatile, it isn't as versatile as a Mytek Private Q. Having said this, besides the Private Q it is one of the more versatile headphones boxes that I've used. Furman is known for making sturdy gear of all types for all different types of the uses, and the HRM-16 is no exception. It is built like a brick and is definitely a piece of gear that should last a very long time as long as it isn't consistently dropped or anything like that. I don't know exactly how much it would cost to get the HRM-16, as keep in mind you need a HDS-16 as well, but these aren't priced unreasonably when compared to the other headphones boxes out there. Having said this, if you're a professional studio looking for a cue system, this Furman box will undoubtedly do a great job at a price that is definitely one of the best systems in it's price range...
Did you find this review helpful?yesno
»