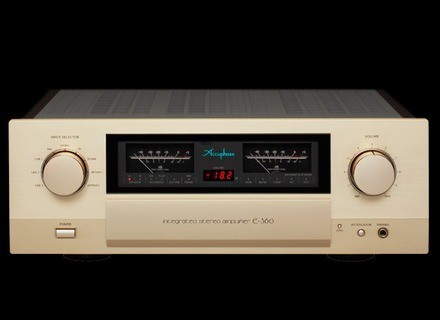 We find this amp accuphase typical with this simple and minimalist design, flanked by large legible seen meters in front. All in a beautiful clear gold delivered and we would like to see more often in other brands. Note that the facade is made of solid aluminum of about 3 mm thick, while the flanks are plastic Barbie and only the cover is metallic. Hum hum ...

I note that my criticism of the pourraves pushbuttons E-260, have been heard here (yes, as if accuphase tests would read some poor clueless to finfond of France) as the E-360 has standard selectors, which allow assume greater reliability over time. There is a good volume control knob and a good selection of sources that were already present on the E-260. Only knobs for tone controls are cheap plastic. But they have the advantage of being hidden by a removable drawer, as we stood on the video cassette 80s. It's top trend of the future and even gives a little character to the look. I just hope that drawer is not the only element that helped to inflate the bill 1,250 euros, compared to its little brother, bringing the overall price 6,750 Euros, which is not nothing. But I'm in bad faith, as it becomes clear that the case of this amp is larger, and that despite this, ELCOS always go to the top of it, leaving a presumed generosity distribution current improved. In any case, these are not additional 10w that will change the world (no figures available for this test).

To listen, I abused the beast. Already, I ironed his full tracklist test accuphase the E-260, and have had great difficulty in understanding the fundamental differences between these two products. You've all heard of psycho-acoustics and limited auditory memory. If so, you understand that I strongly hesitate to share with you my results.

Because, basically, there's no significant audible improvement between the E-360 and E-260, except that some micro-details are better planned for various positions more accurately And yet, in terms of dynamics, the E-360 still seemed to be a more nuanced hair, but in both cases, it's still very weak and in fact negligible. To understand, I could make a comparison with the world of the car saying that GAILLARDO GTRX toured the circuit Nürburg 06min47 dry, and the Mac's irene does in 06min59sec (totally invented numbers). It's that is faster than the other, but both are phenomenal lap. We are in the same situation here.

Both offer a clearly defined investment both in width artists depth, which are also impressive on both. This great Accuphase accurately reflects what is given by the source, detecting every detail and making it as the sound engineer wanted to recreate, but that listening is done in most non-irritating (Ed. attention HP you want to combine, however, will be decisive in the outcome). We heat when it should, and freshness as when necessary. Instruments such as poor recording sound, and good recordings stand out in all their splendor. The dynamic is leading to the two friends, and the ability to adapt and keep all the rhythms too. Bass, midrange and treble sound at maximum capacity. All expectations larger perfectionists are filled as one of the other.

In short! The first accuphase tested was the bomb, and he will do the same. Just have to hope that one day the group back its policy of discriminatory price and will the angels.