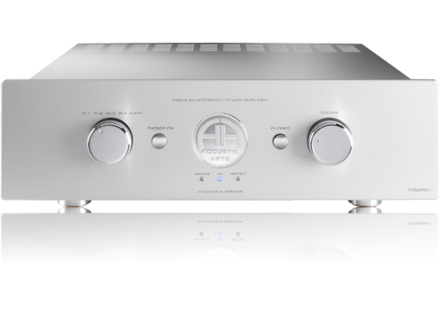 Pucelle_Dabidjan's review (This content has been automatically translated from French)" without notes, but not without notice"

Accustic Arts Power 1 MK3
I made listening to the facility recently. And for once, I did not put any rating that item.

I see a quality finish and workmanship rather in the top of the basket with a box very solid, well licked, buttons that are a pleasure to handle and a board pcb in very neatly engineered, but there too, I remark, like other manufacturers, the board does not include any special difficulty manufacturing or components that could justify the price tag: chf 7'890 (6'567 euros). It also seems to be a recurring problem in Accustic Arts. Teutonic manufacturer would do well to take note before it stands out a bit too!

The 2x135 watts into 8 ohms and 4 ohms 2x200watts are sufficient for many speakers. Standard equipment is poor. Since phono input is available as an option, requiring to extend the bill, and no equalizer is present on the beast. EVEN THE ALUMINIUM BLACK PAY IS AN OPTION! CARREMENT IS ANYTHING!


Its
------------
Overall, the early rounds of Cd Mumphord & sons, sigh no more, I noticed a better storage of the sound spectrum that Leema Tucana on, tried just before. The musicians are better defined and separated while anyway part of a whole. But the dynamic is average, although it gets a little better, which is a scandal for the price. Perhaps this is related to the Leema Xeta, but I have just as much or dynamic width and depth image that the small amp to 5,000 euros. I have, moreover, less width and depth of the image very small Exposure classic 28/23 (approx 3,600 euros nightingale) ... and then I began to find bad joke.

But let us leave the "comparative" because, in general, on all my pieces tests, I have more details to pass through the HP. I have a stronger offensive side, which on the album nada surf, as on the Airbourne sensation. And without ever stealing natural together. Typing on the skin of the battery is well structured, the cymbals are beautifully rendered, although I feel a softening point in the treble. But this is a setting that I appreciate more than the amps 100% faithful in this frequency. Well as on the album Kings of Leon, the return of the fender, which we did feel the presence in the room and the work of breathing of the singer can be tracked. Approach is very good listener that I had with ATC, Exposure and other Luxman.

This is, overall, a very good listener. But still, I found that this lack of space and depth, was not acceptable for the price level.

It may be interacting with both HP at my disposal for testing. But in this context, I would never buy an amp as "moderately good" for this price. "

(No rating) For the doubt should benefit the accused always!