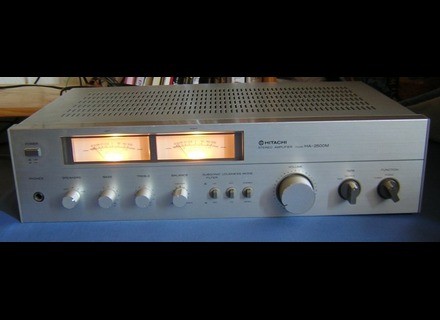 a90ie's review (This content has been automatically translated from French)

Hitachi HA-2500M
170 watts is the consumption of the amplifier. He can not deliver this power to the speakers. I think it should give a big up to one hundred watts total RMS on all outputs, and yet I am very optimistic I think! Anyway, amplifier 20 watts RMS twice and generally ample, see too powerful to listen to music in a salon. To a party, yes, there it is recommended to have an excess of watts! I have a Hitachi HA-171, circa 1976 (with a hybrid of two times 15 watts RMS, shown behind near the AC power cable, a consumption of 80 watts) and already when the meters indicate 1 watt per channel should strongly raise your voice to hear him talk! For the double sense of power (or volume) ears, have to go to 2 times 10 watts, compared to twice 1 watts. So it's all relative, the wattage outputs HP amplifier. Speakers must have good sensitivity, gender at least 90 DB.

The performance data written near the AC power cord is at all times the maximum consumption of the device, including various lighting; LEDs; timer relay etc..

But hey, Hitachi remains a good brand. In addition, the material of this era was built to last in time and not burn out after a few years as it is today! As with all things made at that time, including cars and appliances!
Did you find this review helpful?yesno
»

bohwaz's review (This content has been automatically translated from French)

Hitachi HA-2500M
5
This amp has 20 or 30 years, I know too much. This is an analog transistor amplifier, 170 watts of capacity at all four outputs (2x2 channels: A / B Left / right on each). CT Connect is extremely simple: the speaker outputs, three inputs: Tuner (which we want to take this), Phono (Obviously that takes only the turntable in between) and "Tape Play" and finally an exit "Tape Rec" which can not escape that which comes from tuner or phono.

On the front are: Power Switch, Phones output (which does not cut out HP apprciable), a switch output HP (Off / A / B / A + B), a Bass knob, a knob Treble A knob Balance (to balance the sound right or left), a big knob Crant (very enjoyable), a switch Tape Play / Rec Tape, switch Tuner / Phono, and finally the middle three switches: Subsonic Filter (which cuts the frquences below 20Hz for turntables), Loudness (like Megabass mode, trs impressive, given the low trs beautiful and clear, but I do not need the bass provided by default are satisfactory dj trs) and mode (which switches between Single and Stro [= merge channels stro]).

This is an amp trs trs solid, simple and robust design. At the indoor one would find no need to have diplomas to understand how it works. The sound is warm and trs Fidler, sometimes feel be facing an amp tubes! Finally, since the time it is ... I know absolutely how it can cost in OCCAZ I've ever seen go on the net, and it was for my parents before me. J'apprcie greatly its strong (he avcu stuff in 20 or 30 years!), Its quality sound and also the VU needle meters clear from below, trs tr s beautiful

If you see this amp in a garage sale, you Precipitation Occurred! I rarely heard a sound as good, part of the amps which lights the price is really unaffordable ...

Hitachi HA-2500M manuals and other files