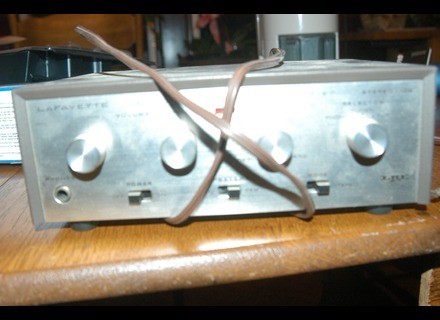 Stereo 10B, Hi-Fi Amplifier from Lafayette.

Lafayette Stereo 10B
4
The Lafayette Stereo 10B is a solid state stereo amplifier designed for use with home stereo systems. Right now I've got mine hooked up to a Rotel turntable and running with a Bellari tube based preamplifier to listen to vinyl on. The 10B is an average little stereo amp and receiver, consisting of three separate channels that each have RCA connections. The unit as a whole has speaker cable outputs and also has an auxiliary speaker output as well. On the front of the 10B there are knobs for choosing between the three channels, for tone, and volume levels for each of the stereo channels. In addition it has switches for choosing between stereo and mono, for choosing between the main and aux speakers, and for powering it up. Lastly, it has a 1/4" output for using headphones with it if you so choose. While I must admit that I probably need to get a new stereo receiver due to the fact that this one is pretty old and is starting to deteriorate a little bit, the Lafayette Stereo 10B has served me well and has done it's job for a while now. It isn't the most glamorous receiver to say the least, as it really just features the minimum amount for a amplifier and receiver, but the minimum is all that I really need in order to use my record player with it. I use the Bellari tube preamp with it to get a louder signal in general, but it isn't necessary if you just want to use the 10B on it's own. I would think that it would be really hard to find one of these now, as the only reason I have it is because it was something that was lying around. However, if you do see one of these around and are looking for a simple and cheap stereo amp and receiver, definitely give it a try...