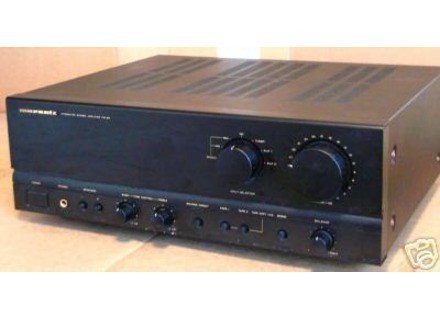 fils2lumiere's review (This content has been automatically translated from French)

Marantz PM 52
5
amp bought in 1993 soon prs.
As for the musicality me CRITERIA crucial and aware that it has a price, I had not hesitating the era invest a little more than 3000F (450euros) the era. I don 't shut down on testing of several magazines logieux <span class="skimwords-unlinked">audiophiles.je</span> had it coupled a platinum cd marantz CD42, a turntable marantz sd415 K7. while the gallant 6000F (900euros) is my 2ers salaries of t (j 'tais students yet), I have had to settle for simple speaker jvc spe440 1000f.
and well despite the cel 2x70w the amplifier has food more than satisfactory, and notched the first months A veritable musical of "mlomane audiophile" I was getting.
power seemed limitless simply: only the proximity of neighbors bridled my pleasure! But the relative lack of deep bass frustrated me: it is claimed that a T would loundness will appreciate better shake my jvc ....
this amp has an input, cd, tape, phono (MM or MC) and receiver, the minimum, and 2 hp output binding because they - they should have munimum 8ohms of Impedance utiliss if at the same time . my jvc both 8 ohms precisely, I 've not been able to use jointly jbl then I coveted as 4 ohms.
rglages bass, treble, balance, but alas no <span class="skimwords-unlinked">loudness.Mais</span> this does is binding only in the event of speakers' low end. "More tape monitor function for the quality controller of the ral recording in <span class="skimwords-unlinked">cours.ET</span> NO REMOTE (a luxury the era).
for 10 years, it me, therefore, provides much of happiness, until this what a speaker from time to time is more food. He had repeatedly press the speaker button or play slecteur source to temporarily resolve <span class="skimwords-unlinked">pb.UN</span> friend me having said that cell could be rgl by cleaning or replacement of a single piece (I forget what), I gave him the gift of the amp, he is responsible for the OPG. ca t seen a real emotional Dchira the trips that he me but I had given me the silent dj DS 1st time this pb with a pm53, half the price with remote control and loudness. smart!.
CONCLUSION: my first audiophile investment that will remain forever in my memory.
Note that the pm53 (bought more than 10 years) 'm also take them to heights of pleasure, and for 2 years that is my father who "has" concerns with 0 reliability issue .
MARANTZ: the sound quality and reliability that fully justify its good reputable and price competitive Lger multimdia (denon, yamaha eg).