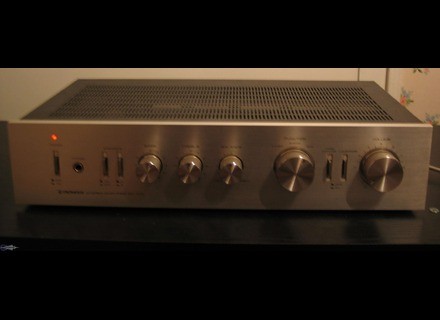 SA-410, Hi-Fi Amplifier from Pioneer in the SA series.

Pioneer SA-410
I bought it for €5 at the flea market. I didn't expect much of it, but the amp was in excellent condition, except for the dirt on the front panel!
I don't now when it was manufactured, despite having taken it apart. Its output powers seems to be 2 X 40 W into 8ohms
The audio quality is good, it's a Pioneer.
For such a ridiculous price, I would buy several of them if they were in the same condition!!!

The 2X 70 W output power you say might be the musical power, I think.
I really don't think this amp exceeds 2 X 50 WATTS given its amplification connector board, but I have no means to measure the real power.
And I don't have the documentation that comes with it, which is a pity because I'm very curious about the tech specs.
I wonder how much this amp would've cost back then, but you probably don't know that either and if it was a present it probably was part of a complete audio system...
Thanks for the info, anyway. I hope this "cheap" amp serves me as well as yours has served you.
Regards.
Did you find this review helpful?yesno
»

Pioneer SA-410
Personally, I got this amp when I was 17. I'm now 43 and it still works without a problem!! You only need to replace 1 or 2 fuses every ten years or so! You got a great deal for 5 euros! As a side note, the output power is 2 x 70 watts!
Did you find this review helpful?yesno
»

- Which features do you like the most / the least?
This amp is EXCEPTIONAL, it's sturdy as they get! I have even used it for monitoring live and it didn't even blink.
Its pros are the solidness and its extreme reliability. It's fed with a power strip, which is very handy to not have to power on the tuner every time.
Its cons are the somewhat limited output power (I have the SA 408, actually, but I can't find it in the product list, and they are similar, anyway), the buttons don't work too well nowadays and the volume control crackles a bit. On the other hand, you should install a small cooling system if you use it for long periods, because the unit has a tendency to overheat. To remedy it ==> Tricks
Nevertheless, this amp has proven its worth because the only repair I've had to make is to replace the fuses, which I did myself. Not bad, after 20 years, especially considering I use it as a DJ (in other words, I don't move it hehe

- How would you rate its value for money?
I don't know how much it cost back in the day, but whatever the price, I think it has been amortized.

- Based on your experience, would you buy this product again?
It's hard to say considering current models, but if I were to found one really cheap in a secondhand store I would get it as a backup, being practical about it.
Did you find this review helpful?yesno
»

Pioneer SA-410
5
I bought this small wonder for next to nothing a couple of months ago. I will use it for parties because the sound is not as disgusting with it. Mine does not heat up at full power and it works perfectly after a good cleanup.
Did you find this review helpful?yesno
»

Pioneer SA-410 manuals and other files