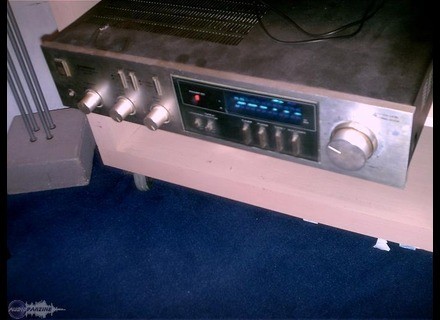 SA-720, Hi-Fi Amplifier from Pioneer in the SA series.

djzacsa's review (This content has been automatically translated from French)

the relative al'norme acute setting for
Did you find this review helpful?yesno
»

lewkey's review (This content has been automatically translated from French)

Pioneer SA-720
4
It comes from a HiFi enssemble my father (Cassettes, Tuner, Vinyl) except that the cassette player is dead (mechanical stops).

this is a great vintage amp, I use it for the computer, on a plate as MiniDisc and waking (see below). It is connected to two speakers m32i Mission, and the driver perfectly.

to plug into the computer, I prefer to connect without contact, so I use the optical output of the PC and a small optical or coaxial DNA that plugs in CAR (it's optical isolation, the electronics are reconaîtront! ).

as it is plugged into a remote and a programmer, I use that time clock (it takes me usually decibels to wake me up!) thanks to the automatic reading of the drive is much MD.Le better than the Radio alarm clocks! on the other hand, for now, obviously I use an alarm clock, but it serves me just look at the time.

already used for the amps I had a sony amp for the HC (STR-DE598), but I replaced it with a Onkyo (NR-906) better (c not all the same line! plus the price difference.)
Did you find this review helpful?yesno
»

Pioneer SA-720
5
I have used it for 5 years in a small studio that has a good record maison.It has high power, I use it with two speakers intacte.Ce mercurial he can be blamed is to have a sound " Gross. It supports diverse Absorbed power of another hi-fi system (which has excellent sound numrique) and shuffled the two is a rgal ^ ^
I got it free and it never does my dcu, yet how many times I reached the crest ...
The amp itself does not deteriorate and is taking aps really getting old, it has a nice vintage facade but sturdy but the thing is the sound quality is not comparable to what is being done TODAY 'Today ... with good speaker and good crossover is enough fun ^ ^
I have not had a penny for adpenser this amp have a choice ... if it sells below 80 in a flea market I redeemed Althoughthe that refuses to make the soul ^ ^
Did you find this review helpful?yesno
»