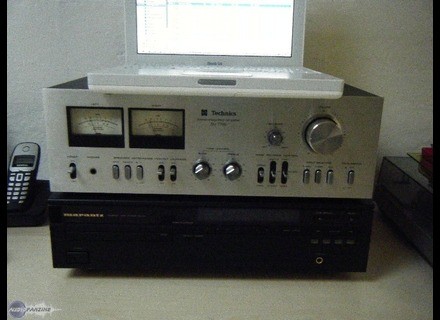 Technics SU-7700
5
It's been more than 30 years since I got it and I've never had a single problem, except from time to time when I need to clean the contacts of the pots. Other than that it has provided good and faithful service for 30 years, even though I've put it through some hard times, considering that the music I play most is metal...I have even plugged a guitar into it. I can only say thank you my dear SU-7700.
Did you find this review helpful?yesno
»

Technics SU-7700
I bought this amp secondhand. I was disappointed with the sound the first time I listened to it, it lacks basses and the sound quality is bad, not pleasant to the ear. Could it be that the capacitors are worn out?
Did you find this review helpful?yesno
»

Technics SU-7700
5
What a find! I bought it in a secondhand store for peanuts because it was in a very bad shape, the front was dirty, the inside was covered in dust, four inches accumulated in three decades (the old man who sold it to me told me he had it 15 years stored in his cellar!). I ran a first test, I connected everything and turned the speakers on...Nothing happened, no sound, no noise, the VU-meters didn't move nor did they light up.
I opened it up and, as I wrote above, it was full of dust (I had never seen so much in one place). Two hours later I could see more clearly inside, but there was still no sound. The first reason was the relay didn't work.
To cut a long story short, the relay serves as buffer switch: When powered on, the power supply sends electricity to the filtering condensers, their role can be assimilated to an energy reserve in order to feed the power stages continuously when lots of power is demanded. The relay becomes useful right when it allows current to flow as soon as the filter capacitors have taken in enough current.
A brief checkup with a multimeter allowed me to verify the good health of the Technics. (I must note that the number of components is staggering). Since the relay didn't work, I didn't even bother to test it...But after a short while I realized I had forgotten it and discovered it was actually fine: Engaging it manually made sound come out one of the speakers. This made me start from zero again, with an added problem. Namely, no sound on one channel and an issue with one or more components.
Given the electrical complexity of the amp, the technical diagrams were quite useful. I immediately thought about the four transistors in charge of controlling the relay and protecting the speakers, so I had to isolate the broken transistor, which wasn't easy to test. They all seemed okay, but, logically, the problem couldn't be rooted anywhere else.
At this point, I had been working three days on the amp and still had the hardest part ahead of me...I needed to take the entire amp apart to change the transistors properly. In other words, about 10h of work to be able to take the logic card out.

I took the opportunity to change the power cord, too, which was screaming for it. A new, shielded AC cord never did any harm. Since the light bulb of the VU-meters was blown, I replaced it with a Marantz one from the same period (it provides more light with the same amperage). I then changed the heat paste between the power transistors and the heat sink, put it all back together (one more day of work) and powered it on. Three seconds later, the relay was activated. Sound came out the right channel. A quick check of the fuses and replacing one of them (which didn't seem to be blown) solved the problem. What a relief.
04h35, first test, Katie Melua - Spider’s Web. No surprises... After 15 years without electricity it had to regain its health slowly. I'd resume listening in the morning or the afternoon...and leave it powered on a moment.
Okay, the time came to put it to the test. Same song. The sound is impressive, clear, the VU-meters respond well and vibrations fill the room, very good presence in the lows and an overall perfect dynamic response. It sounds vintage and the increase in power is dazzling. After a day of listening, the timbres are more refined, vocals are warmer: No noise, no unbalances. This amp provides a real listening delight. The 7700 confirms that the notion of a Watt has certainly changed after 30 years! It can handle my Avantgardes without a sweat and provides very nice "jazzy" sounds. Once again, long live vintage gear!
Did you find this review helpful?yesno
»

Technics SU-7700
5
I've been using it for two years. Having tried out lots of amps, it comes out pretty good: it's Class A! It makes the room warm up. Wooden sides, black paint with a metallic protection filter on the inside and connected to ground: They don't make them like this anymore...It's excellent for the price. Impressive sustain, very stable stereo image, it takes several minutes to warm up. Very good bass foundation. I always use several systems to judge a sound (amps, speakers) and this amp is really worth it because it's a pleasure to listen to it, it's never aggressive. If you want more pep, you'll need to look for another amp. But eagerness should always remain under control, or it can turn into aggressiveness. Fortunately, the SU7700 knows how to stay in control: Bravo!
Did you find this review helpful?yesno
»

Technics SU-7700 manuals and other files